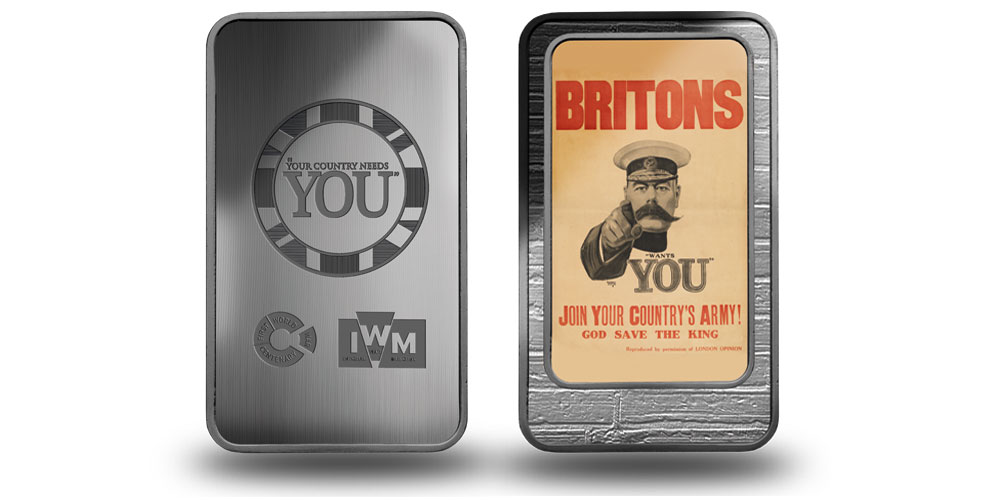 The London Mint Office produces coins, medals and ingots to commemorate world events and historic milestones. IWM (Imperial War Museums) tells the story of people who have lived, fought and died in conflicts involving Britain and the Commonwealth since the First World War.

The partnership will help examine the context of these famous First World War recruitment posters through an exclusive set of commemorative ingots available in this centenary year. The emotive propaganda posters were carefully designed to strike a chord with potential conscripts in towns and villages across the land as well as overseas, appealing them to enlist, leave their homes and families, and serve their king and country.

Imperial War Museums has selected a number of these iconic posters to be reproduced in full colour on ingots that are to be issued in an exclusive collection by The London Mint Office. Each artist used their own individual approach in mobilising young men and women throughout the length and breadth of the country, sometimes whipping up patriotic fervour, sometimes appealing to their sense of adventure, whilst often reinforcing the social pressures faced in their daily lives.

Managing Director of The London Mint Office, Greg Prosser said: “We are excited to create a special collection of ingots that celebrates perhaps the most iconic images of World War I, which launches this exciting new partnership with Imperial War Museums in such a momentous year. The war posters were instrumental to the war effort as they called the nation to arms, and so our interpretations are a fantastic way to commemorate the end of the war.”

The set begins with the Official Imperial War Museums Silver Layered Ingot featuring the instantly recognisable image of Field Marshal Lord Kitchener. This now infamous image actually started life not as a poster but as the cover of London Opinion magazine in 1914. It was created by professional illustrator Alfred Leete and shows the then Secretary of State for War pointing an accusatory finger at the viewer, directly appealing them to enlist. The image has resonated through the decades, and is even used in US recruitment drives today.

IWM (Imperial War Museums) tells the story of people who have lived, fought and died in conflicts involving Britain and the Commonwealth since the First World War.

Our unique Collections, made up of the everyday and the exceptional, reveal stories of people, places, ideas and events. Using these, we tell vivid personal stories and create powerful physical experiences across our five museums that reflect the realities of war as both a destructive and creative force. We challenge people to look at conflict from different perspectives, enriching their understanding of the causes, course and consequences of war and its impact on people’s lives.