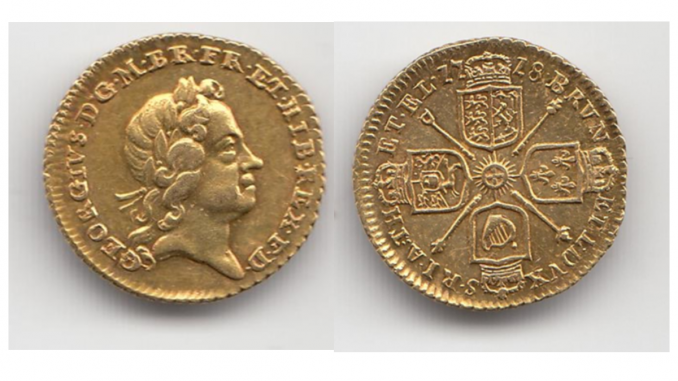 Coin of the week – 1718 Quarter Guinea – Brainchild of a genius

In 1699 a certain Sir Isaac Newton became Master of the Mint. Employed originally as Warden of the Mint from 1696, he was tasked with eliminating counterfeiting and improving the overall quality of Britain’s coins. Applying his scientific genius, he developed new assaying techniques which enhanced the standard to which all coins would be measured...

'On The Money' with Justin Robinson

Justin Robinson’s love of history began as a small boy, when his grandfather gave him a poster of a skeleton from a local archaeology group to put up on his bedroom wall. Over the image were the words, “ We rescue your past from the present for the future ”. The words intrigued him far more than the picture, and the rest is, as they say, history....

A Crown to Mark a Crowning Achievement

However delicately you put it, it’s probably a safe bet to assume that none of us are ever going to witness another Sapphire Coronation Jubilee in our lifetimes. The longevity of our Royal Family is, of course, something to celebrate. But with a Prince of Wales who celebrates his seventieth birthday later this year, and his eldest son already ten...

Read more: A Crown to Mark a Crowning Achievement

Last month, Deputy Chief Constable Mark Roberts hit the headlines by requesting that England fans heading to Russia for the World Cup leave their English flags at home. As the national lead of football policing, DCC Roberts is understandably keen to avoid a potential confrontation between patriotic flag waving England supporters and equally...

When I was a small boy I once received an Eisenhower dollar as a gift from my Great-Uncle Gwyn. I’m not sure what Great-Uncle Gwyn did for a living, but he seemed to spend a great deal of time travelling. My grandmother would proudly display postcards from far flung exotic locations that she had received from him. Judging from the ten gallon hat...

The Angel of Passchendaele

It probably won’t have escaped your notice that the London Mint Office is currently offering a free coin to commemorate the centenary of the third battle of Ypres, or Passchendale as it became known.

Read more: The Angel of Passchendaele

For many years, mints around the world have been grappling with a rather thorny problem. With the average age of coin buying customers increasing every year, it is becoming more important than ever to find new and interesting ways to tune younger audiences into the fascinating world of coins.

The Power of the Story

I’ve always believed that great stories make great coins. Without a good story, a coin is little more than a small lump of stamped metal. Obviously, some metals are more expensive than others, and even the most boring coins struck in gold will find an enthusiastic audience. But a coin without a story is a bit like a strawberry without cream,...

Read more: The Power of the Story

The Most Famous Fight in Numismatic History

1817 was a very important year for gold coins. Two hundred years ago, the modern sovereign was introduced and featured an original depiction of St George and the Dragon by the renowned Italian sculptor Benedetto Pistrucci. The design quickly became a much-loved favourite and has been used more or less continuously to this day.

Read more: The Most Famous Fight in Numismatic History