A GOLD SOVEREIGN IS STRUCK IN ROME 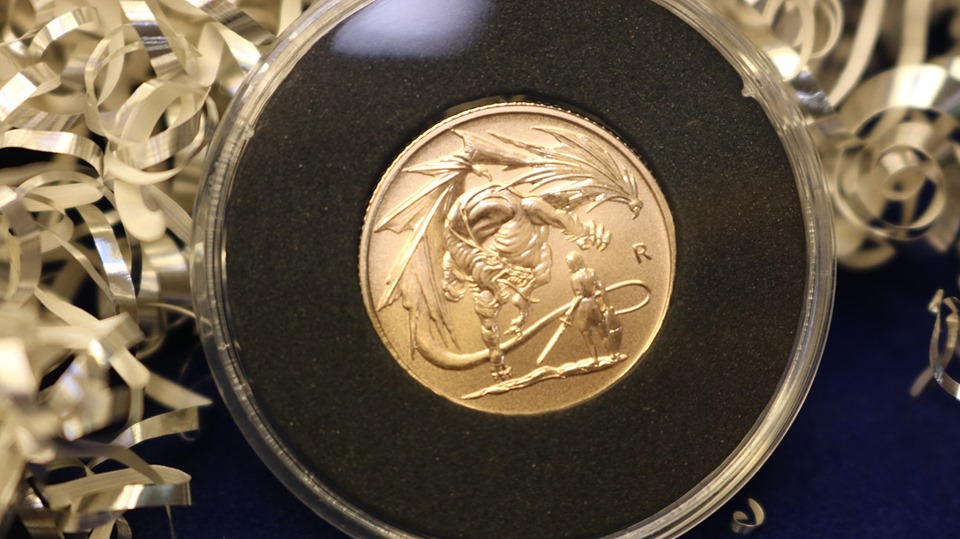 A GOLD SOVEREIGN IS STRUCK IN ROME, THE BIRTHPLACE OF ITS ORIGINAL DESIGNER, FOR THE FIRST TIME.

On 10th October 2019, the national mint of Italy struck a gold sovereign for the first time. Issued by the Government of Gibraltar with the approval of the Treasury and in partnership with The London Mint Office, the new coin features a design by Angela Pistrucci, a descendant of original designer Benedetto Pistrucci. It will go on permanent display alongside her ancestor’s work in Rome, where both artists studied.

The gold sovereign has a long and distinguished history. The first English coin to bear the name was struck by King Henry VII in 1489 to demonstrate the wealth and stability of the Crown. However, after the Tudor dynasty ended in 1603 the coin was not struck again until 1817, when it made a welcome return to the national currency. Over the next century, it became arguably the most important trading coin in the world, and was struck in Australia, Canada, India and South Africa when all were part of the British Empire.

The 1817 sovereign was designed by the brilliant Italian sculptor and engraver Benedetto Pistrucci (1783-1855). His iconic depiction of Saint George fighting the dragon in the neo-classical style has become Britain’s longest serving coin design and continues to appear on British commemorative sovereigns struck to this day.

To honour the bicentennial of Benedetto’s famous design, the London Mint Office invited his great-great-great-great niece Angela to create her own interpretation of her ancestor’s masterwork as a tribute. Canadian artist Angela Pistrucci was thrilled to accept the commission, and in 2016 she won a scholarship to study in Rome where Benedetto had also learned to sculpt and engrave.

At the Istituto Poligrafico e Zecca dello Stato (Italian Mint) Angela worked with some of the world’s best teachers in direct engraving, calciography, wax modelling, copper enameling, and stone cameo carving to refine her skills. It was while she was there that she began developing her own version of Saint George and the dragon, which was later unveiled to great acclaim at the World Money Fair in February 2017. The new sovereign was so successful that Angela has followed it up with new designs that have appeared on sovereigns struck in 2018 and 2019.

Sovereigns struck in the British Empire in the last century displayed a small mint mark under the Saint George design to enable people to see where they had been produced. In Australia, the Sydney mint used an ‘S’, Melbourne an ‘M’ and Perth a ‘P’. Sovereigns struck in Ottowa bore a “C” mintmark (for Canada), Bombay used an ‘I’ (for India) and Pretoria sovereigns have ‘SA’ for South Africa. To maintain this tradition, the 2019 sovereign struck in Rome has a unique “R” mintmark alongside Angela’s design. This will distinguish them from other Gibraltar sovereigns, which are struck in London.

After the striking, a special ceremony was held at the Italian Mint museum, where the 2017, 2018 and 2019 dated sovereigns bearing Angela’s modern interpretations of Saint George and the dragon were unveiled in the museum’s permanent collection. These will now sit proudly alongside Benedetto’s original design, as a fitting tribute to the talent of a remarkable family in the city in which each artist refined their craft two centuries apart.

Quote from The London Mint Office

“The gold sovereign is a much loved coin in Britain and her overseas territories, and the Pistrucci name will forever be associated with it. I am very proud that the Italian Mint should be the first country outside the British Empire to strike the sovereign. Rome was the birthplace of the designer of the modern sovereign two centuries ago, and I cannot think of a more fitting place for a sovereign designed by his descendant to be struck, particularly as both Pistrucci’s studied their craft right here.

Quote from the Italian Mint

“The sovereign is a world famous coin, and we are delighted to partner with The London Mint Office and Samlerhuset Group to strike one for the very first time in Rome”.

My work will sit next to Benedetto’s, in one of the most prestigious numismatic locations in the world, and in a place with such special meaning to us both. I am especially thankful to The London Mint Office for believing in me and giving me an opportunity that few will experience in their lifetime, and for their guidance and unwavering enthusiasm.

The Italian Mint (Istituto Poligrafico e Zecca dello Stato), founded in 1928 and turned into a joint-stock company in 2002 with the Ministry of Economy and Finance as its sole shareholder, Istituto Poligrafico e Zecca dello Stato is a key player in design and manufacturing of security documents to protect the physical and digital identity of citizens and products. Among its institutional tasks, the Mint is entrusted with coinage of the Italian euro coins, as well as of legal tenders for a number of foreign countries, such as the Vatican State and the Republic of San Marino.