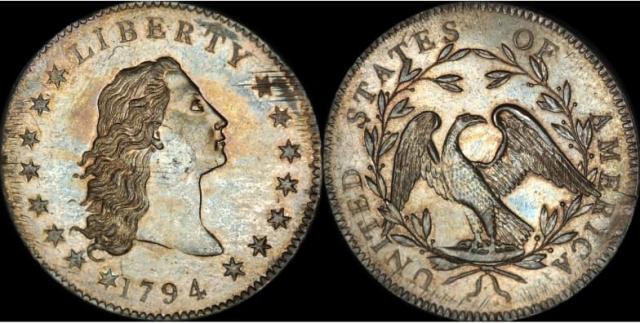 17 MARCH 2016, London: With a value of over $10 million, the world’s most valuable coin - the ‘Amon Carter’ Flowing Hair Silver Dollar, the first dollar to be minted in the U.S.– arrived in London today and will be put on free public display in the U.K. for the first time ever.

The exhibition which is hosted by The London Mint Office will see the coin exhibited in the heart of London at La Galleria from 18 – 20 March 2016. The coin is being displayed alongside an original copy of the American Declaration of Independence, printed in Boston in July 1776, which is worth approximately $4 million, giving history and coin collecting enthusiasts the opportunity to see two great icons of American history.

The 1794 Flowing Hair Silver Dollar is one of the most highly regarded coins in the coin-collecting world. The actual coin being displayed in the U.K. was sold at auction on 24 January 2013 for $10,016,875 – a world record price for a coin. The exceptionally high quality of the coin resulted in it being certified by Professional Coin Grading Service (PCGS) as a specimen – 66 on the numismatic grading scale of 1 to 70, making the coin the finest of its kind. Many coin experts believe that this was in fact the first dollar ever to be struck, which would also mean that that George Washington himself would have inspected it personally.

The first U.S. Silver Dollars were all struck on 15 October 1794, with a total of 1,758 silver dollars made on that one day on a hand-turned screw press at the Philadelphia Mint. Designed by Robert Scot, the U.S. Mint’s chief engraver from 1793, the obverse of the Flowing Hair Silver Dollar is graced by the figure of Liberty, adorned with flowing hair, and surrounded by fifteen stars - representing the fifteen states of the United States of America at that time. The reverse featured an eagle encircled by a wreath, and the legend United States of America.

The London Mint Office is offering U.K. households the chance to own a Flowing Hair Silver Dollar for themselves, giving away for free up to 100,000 scale reproductions of the world’s most valuable coin, layered in pure silver. The free scaled reproduction coin can be ordered at www.flowinghair1794.co.uk .

This renowned coin is owned by New Jersey businessman, Bruce Morelan who comments: “I’m extremely proud to own the first American Silver Dollar ever to be struck, it is the centre piece of my collection. For me, its rarity, quality and pedigree make it the ultimate collectable coin, and one hundred percent worthy of being the world’s most valuable coin. I’m honoured to own the coin and see it go on display in London so that many more people may enjoy its unique qualities.”

James Deeny, Managing Director at, The London Mint Office says: “We are delighted to be bringing such an exciting exhibition to London and Europe. It’s incredible to think that this coin represents the very beginning of what has become the world’s most important currency. Its record breaking value and beauty make it a ‘must see’ for anyone, young or old, with an interest in history, America, design or who simply want to see something extraordinary. We hope as many people as possible take up this one-off opportunity to see the world’s most expensive coin while it is on U.K. soil, and to order a replica coin for themselves.”

The first visitors to the Flowing Hair Silver Dollar exhibition on each day will each receive a special limited edition book on the history of the U.S. dollar, “A Superpower is Born: The Rise of the Dollar”.

This is the first time that a 1794 Silver Dollar has ever been exhibited in London and is the final leg of a landmark European tour which has seen The London Mint Office’s parent company, Samlerhuset, take the coin to seven other European countries (Czech Republic, Poland, Estonia, Finland, Sweden, Norway and Ireland). For more information about the tour and about the free reproduction coin, visitwww.flowinghair1794.co.uk