250,000 free commemorative medals available to the public to commemorate the 75th anniversary of the Battle of Britain (2015) 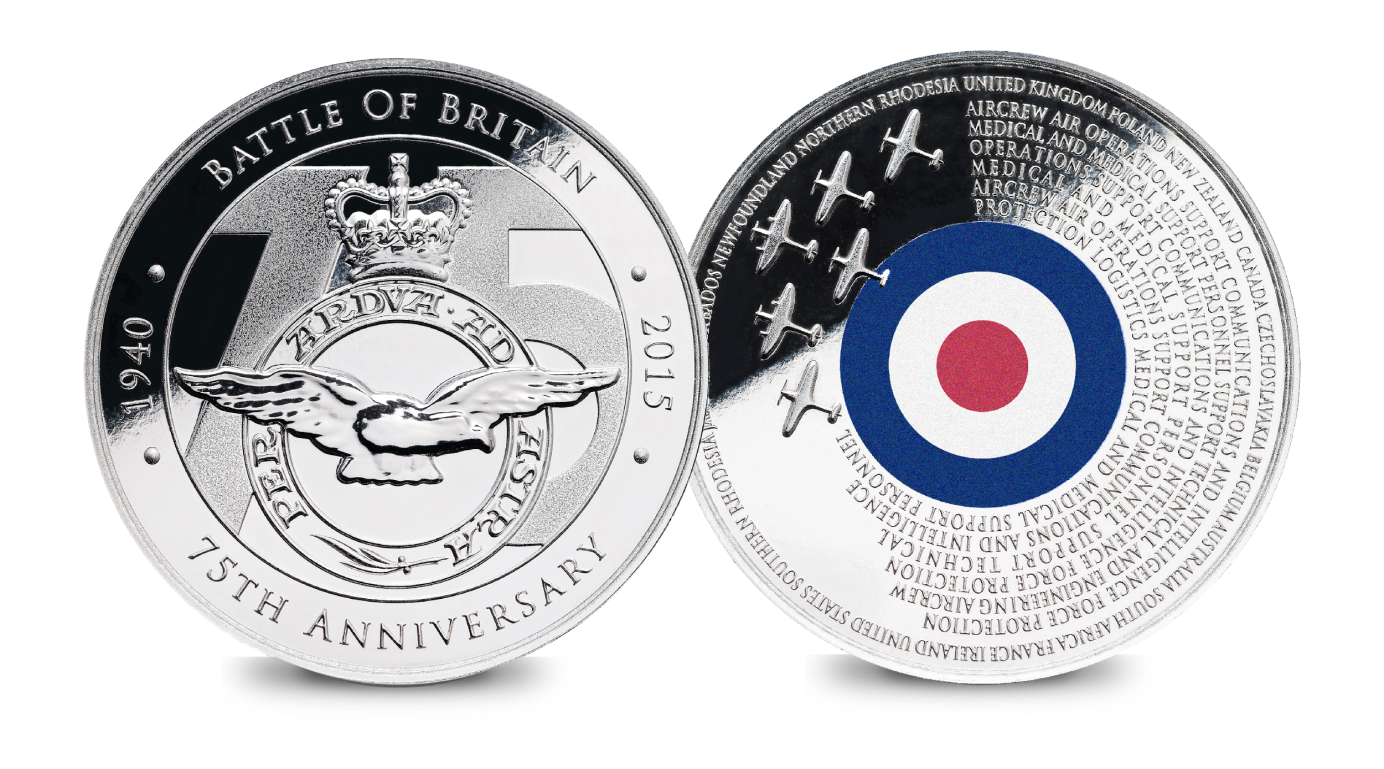 On the 75th anniversary of the Battle of Britain the Royal Air Forces Association (the Association) is making 250,000 Commemorative Medals available free to the public, in recognition of the contribution of all arms and all nations represented in the RAF when securing this vital victory in 1940.

The Royal Air Forces Association, the charity that supports the RAF family, is releasing the first ever Commemorative Medal to pay tribute not only to the airmen, but also the men and women from ground crew, operational support, logistics, communications, engineering and medical crews from the 16 countries represented amongst the ranks of the RAF air and ground crews who participated in the Battle - without whom victory may never have been possible.

The medals, designed and funded by The London Mint Office and manufactured by Worcestershire Medal Service, are part of the Official Commemorative Programme launched by the Association to mark the 75th anniversary of the Battle of Britain. The commemorative programme has been developed and created with the help and support of  Terry Jervis, of Jervis Entertainment Media. The free medals are limited to one per household and are available from https://www.londonmintoffice.org/

In July 1940 the Battle of Britain commenced and was one of the most crucial stages of the Second World War. As the German air force, the Luftwaffe, attempted to gain the upper hand over the RAF, 15 additional countries began supporting the RAF’s air operations by contributing aircrew and ground crew to the Battle, which ultimately led to the victory. Pilots and aircrew from Great Britain, the Commonwealth and from occupied nations such as Poland and Czechoslovakia fought heroically from July to October 1940 for control of the skies over Great Britain. The resulting victory by the RAF enabled the Western Allies to later launch the liberation of Western Europe from the UK and compel the Germans to fight on two fronts, which lead to their ultimate defeat.

The Commemorative Medal pays tribute to the personnel from all of the countries that played a decisive part in the battle. It credits the courage and sacrifice of the ‘unsung’ heroes who worked tirelessly on the ground or behind the scenes to help successfully defend the nation. The obverse features an eagle superimposed on a circlet surmounted by a crown – the Official Crest of the RAF – with a ‘75’ frosted in the background. Around the crest is the inscription ‘Battle of Britain 75th Anniversary 1940 - 2015’. In the centre of the reverse is the legendary RAF roundel encircled by a depiction to commemorate all the nations and arms represented in the RAF during the battle. The reverse also incorporates a representation of a flight of iconic Spitfire and Hurricane fighters flying in formation across the medal.

The equivalent roles and functions within the modern RAF represented include:

The participating countries represented are:

“What makes this anniversary so poignant is that it is likely to be the last opportunity for the remaining veterans to commemorate alongside us. It is right that we pay tribute to not only the countries that participated but also all the airmen, airwomen and supporting trades that played a vital role in this epic battle. The commemorative medal is a fitting tribute to all those past and present and provides an opportunity to honour these remarkable individuals. We are pleased to be able to share this medal and everything it represents with the public,” comments Air Marshal Sir Dusty Miller, President of the Royal Air Forces Association.

In addition to the free Commemorative Medal, the Association is releasing five limited edition medals (only 9,999 available), struck in solid bronze and layered in pure silver featuring Sir Winston Churchill (Wartime Prime Minister), Sir Douglas Bader (Fighter Ace), Sir Hugh Dowding (RAF Air Chief Marshal), Robert Watson Watt (Pioneer, “The Father” of Radar) and Lord Beaverbrook (Minister for Aircraft Production, and responsible for the “Saucepans for Spitfires” campaign). A percentage of the revenue from all medal sales from this programme will be donated to the Association.