A portrait of the true legend Dame Vera Lynn painted by the acclaimed Norwegian artist Ross Kolby and commissioned by The London Mint Office will be gifted on completion this year to the Royal Albert Hall, which Dame Vera regards as “the perfect place” for her portrait.

Dame Vera Lynn will be 102 in March, and is an iconic artist synonymous with World War 2, recognised as the Briton who best exemplified the spirit of the 20th century. She performed at the Royal Albert Hall on fifty-two occasions, was most recently seen there in a video recording on 6 June 2014 at the BBC Radio 2 ‘D-Day 70 Years On’ concert, and is delighted to see this final portrait of her, the first in decades, to hang there on public display for posterity.

It is currently being painted by the Norwegian artist Ross Kolby, famous for his portraits ‘The Kings of the Liberation’, a triple portrait to celebrate the 70th anniversary of the liberation of Norway from German occupation. The paintings feature the three generations of Norwegian monarchs attached to the events of World War 2, and now hang in Norway’s Resistance Museum in Oslo.

He captures Dame Vera in a painting full of symbols pointing at her life and events in World War 2. The London Mint Office is at the centre of British numismatics, bringing the fascinating world of coin collecting to both existing and new collectors, and is working with Dame Vera on a collection to mark this year’s 75th anniversary of D-Day.

Dame Vera said: “It was a pleasure to meet Ross earlier this year and I am delighted that he is painting my portrait. I have seen the draft sketch and it is wonderful how he has managed to include so many of the key elements of my life into the painting.

“I am very excited to hear the completed portrait will be housed in the Royal Albert Hall, which is a great honour. I have performed at the Royal Albert Hall on many occasions during my career and it will be very special to have a permanent presence there. My sincere thanks go to the London Mint Office. The association with this well-regarded organisation is an honour and I am especially grateful that my Children’s Charity will benefit from the project.” 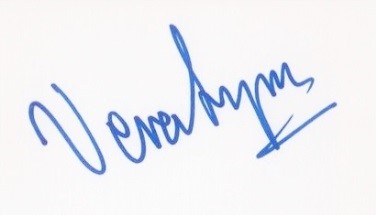 Vera Lynn was a popular recording artist of 22 when war broke out in 1939, and ‘the Forces’ Sweetheart’ went on to become a symbol of the wartime era and an inspiration to the Allied troops worldwide. 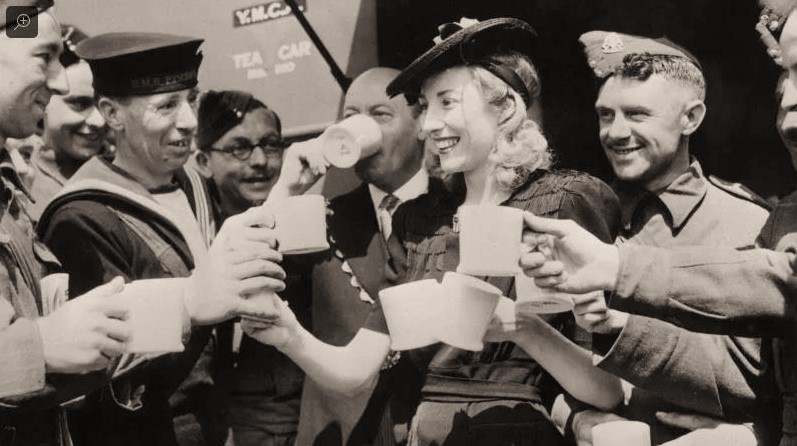 Vera Lynn cheering with military personnel after a concert.

Her BBC radio programme ‘Sincerely Yours’ featured messages and songs to the British troops worldwide, each one ending with the legendary ‘We’ll Meet Again’ which inspired and comforted troops and civilians alike. Another of her timeless songs, ‘The White Cliffs of Dover’ brought hope of freedom in the darkest hours.

Vera Lynn joined The Entertainments National Service Association (ENSA) which provided troops with entertainment worldwide, touring Egypt, India and Burma and giving outdoor concerts for tens of thousands of military personnel. She often faced the threat of being captured by the Japanese, giving rise to tour leader Captain Bernard Holden’s note of “her courage and her contribution to morale.”

Her enduring popularity produced a No. 1 album in 2009 for ‘We'll Meet Again: The Very Best of Vera Lynn’, and she became the oldest recording artist in the world when she reached No. 3 on the charts with ‘Vera Lynn 100’ in 2017.

Liz Harper, Archive Manager at the Royal Albert Hall, said: “Dame Vera has played a special part in the Hall’s storied history, performing here more than 50 times between 1937 and 2006. As we look ahead to our 150th anniversary in two years’ time, we’ll be spotlighting our venue’s unique heritage more than ever, and we’re delighted to accept this portrait of Dame Vera as part of those celebrations.”

The London Mint Office is part of the Samlerhuset Group which produces the medal for the annual Nobel Peace Prize, and worked with Kolby on ‘The Kings of the Liberation’.

Kolby said: “It is a true honour to be able to portray Dame Vera, who by her personality and her dedication became the heart of a nation. Through her music, BBC broadcastings and travels she spread hope, inspiration and joy to both the Allied forces as well as to the public all over the world during WW2.

“Dame Vera is a symbol of the uniting of countries and peoples that brought down the dark forces in the world during WW2. This uniting is no less important today, and she remains a true inspiration of how much one single person can mean and do in difficult times.

“I am delighted to work with The London Mint Office on this project, and it is a true honour that the painting will find its place in the Royal Albert Hall."

Kolby met with Dame Vera at her home in Ditchling and made sketches that he is working from for the painted portrait. It will be made in oil on wood, and will, appropriately, have a handmade, high quality wooden frame. The size of the portrait will be approximately 90 cm x 70 cm.

Managing Director of The London Mint Office, Daniel Penney said: “Dame Vera is an iconic figure who has illuminated the world with her astonishing voice, her personality and sincerity. The London Mint Office is excited and hugely honoured to be working with Dame Vera, and with an artist of Ross’ calibre, and our many thousands of collectors can look forward to something really special during 2019.”

Norwegian artist Ross Kolby (48) is known for paintings on a wide range of topics. His futuristic vision of an African Pope became an image that gave rise to worldwide debate. Kolby has for several years worked extensively with portraits of individuals central to the events of WWII.

His triple portraits ’The Kings of the Liberation' are of King Haakon VII, who fled to London on the Nazi invasion, and led his exile Government and Norway's freedom fight from there; of King Olav V, who as the Crown Prince worked by his father's side in this fight; and of Prince Harald - His Majesty King Harald V today - who as the future heir to the throne in Norway became the centre of a campaign in 1940 to be accepted by Hitler as Norway's child king. Prince Harald managed to flee to Washington with his mother and sisters as guests of President Roosevelt, where they remained throughout the war.