10 facts about that fairy tail wedding 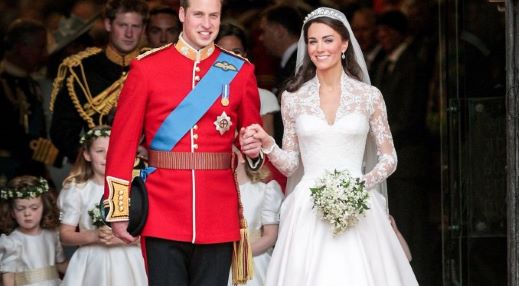 On the 29th April 2011, a beautiful Catherine Middleton arrived at the doors of Westminster Abbey, wearing a stunning ivory gown and a bright, beaming smile on her face. As she walked down the aisle with over 1,900 guests looking on, she was met with the look of a man whom she would go on to spend the rest of her life with – our future king, Prince William. 10 years to the day since His Royal Highness Prince William said ‘I do’ to his university sweetheart Catherine Middleton, in what can only be described as a scene from a fairy-tale and a decade of unwavering love, commitment and dedication.

Here are some fun facts about the momentous day:

1. April 29, 2011 was a national holiday, allowing the British public to celebrate our future King and Queen consort’s special day.

Some of the lace on Kates dress was old, her diamond earrings were a new gift from her parents, her tiara was on loan from Her Majesty The Queen and Sarah Burton of Alexander McQueen sewed a blue ribbon inside her dress.

4. Kate’s wedding band is made of Welsh gold.

5. The 1902 State Landau carriage used to carry the newlyweds past the crowds was also used by Prince Charles and Diana, Princess of Wales at their wedding.

6. On the weeks leading up to the big day Kate took a few make-up lessons from London makeup artist Arabella Preston, and on the day the soon-to-be duchess created her own softly romantic look.

7. Prince William received not one but three new titles: On the day of his wedding, William became the Duke of Cambridge, the Earl of Strathearn, and Baron Carrickfergus. Since he already had a title in Wales (Prince of Wales), he now has one for each of the four countries in the United Kingdom.

10. Kate’s engagement ring once belonged to her mother-in-law Princess Diana.