A Crown to Mark a Crowning Achievement 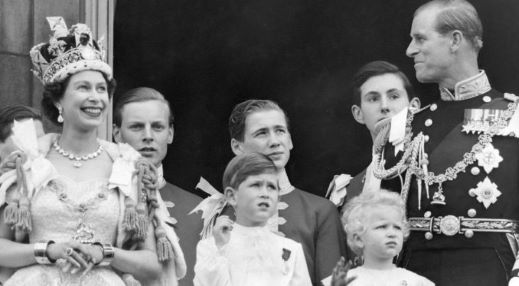 However delicately you put it, it’s probably a safe bet to assume that none of us are ever going to witness another Sapphire Coronation Jubilee in our lifetimes.  The longevity of our Royal Family is, of course, something to celebrate.  But with a Prince of Wales who celebrates his seventieth birthday later this year, and his eldest son already ten years older than his grandmother when she became Queen, even my notoriously unreliable maths can see that the next Sapphire Coronation Jubilee is likely to be some way off.

Our present monarch Queen Elizabeth II holds the distinction of being the only monarch on this island ever to experience more than sixty-five years on the throne.   She’d already been Queen for over a year when the crown was ceremoniously placed on her head by the Archbishop of Canterbury Geoffrey Fisher in Westminster Abbey on 2nd June 1953.

The coronation ceremony took fourteen months to prepare, and was broadcast live on television against the express wishes of Churchill who felt that it would trivialise such a solemn moment.  On this occasion, the Queen overruled her Prime Minister.  She wanted her subjects to enjoy a glorious spectacle that would herald the dawn of a new era after the bleak post-war years. Over half a million television sets were purchased in the months prior to the coronation, and when the day came over twenty million people crowded around the small flickering screens to watch their young Queen crowned sovereign of the United Kingdom, Australia, New Zealand, Canada, South Africa, Ceylon and Pakistan.

As with any elaborate ceremony that takes months of careful planning and preparation, not everything went smoothly on the day.  On the morning of the coronation it was discovered that the carpet in the Abbey had been laid with the pile running the wrong way.  Although not noticeable to the millions watching at home, this error caused the metal fringe on the Queen’s golden mantel to catch on the pile, forcing her back when she tried to move forward.  As a result, she had to ask the Archbishop standing at her side to “get me started”.

The eight thousand invited guests who packed into Westminster Abbey were mostly aristocrats and heads of state together representing 129 different nations and territories.  Many prepared for the three-hour ceremony by smuggling sandwiches and beverages into the Abbey to sustain them.  Later, they attended a special luncheon in which they were introduced to a new dish created especially for the occasion, Coronation chicken!

The Queen’s unprecedented decision to permit television cameras to film the coronation allowed the rest of the world to share in the celebrations. It is estimated that a worldwide audience of 300 million watched her make a solemn oath to govern the people, uphold law and justice and maintain and preserve the Church of England

To celebrate the first Sapphire Coronation Jubilee in British history, the government of Gibraltar have issued a special commemorative crown to mark this unique anniversary.  Gibraltar was the last stop of the Queen’s 1953-1954 coronation tour, in which she Prince Philip travelled over 40,000 miles visiting her subjects in Commonwealth countries and British overseas territories.  It remains the longest Royal tour ever conducted, and it took an astonishing seven months.

The coin depicts two state trumpeters heralding the arrival of the new monarch.  They stand proudly on either side of the Crown of Saint Edward, which was placed upon the head of the young Queen by the Archbishop of Canterbury during the coronation ceremony.  Also featured in the design is the Sovereign’s Sceptre with Cross, which has been used at every coronation since it was made for King Charles II in 1661, and Queen Mary’s Sceptre with Dove, created in 1689 for the double coronation of King William III and Queen Mary II.

These distinctive elements evoke the pageantry, pomp, splendour, and tradition that created such a memorable moment in the life of the nation, a day still fondly remembered by those fortunate enough to have witnessed it, which heralded the beginning of the second great Elizabethan age.