Making numismatic history with an event that will never be seen again in our lifetimes!

On 6th of February, historian Justin Robinson attended a struck-on-the-day event like no other, an event that made numismatic history! Justin proudly gave this speech to mark this momentous occasion. 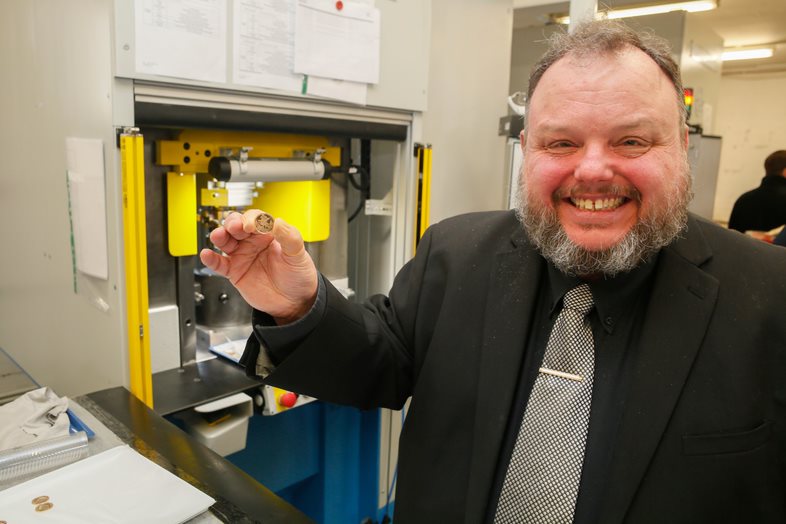 Seventy years ago today, thousands of miles away in a remote part of Kenya, a young woman went to bed a princess and woke up a Queen. As the world mourned the death of her father, King George VI, the extraordinary reign of Queen Elizabeth II began.

Our Queen has been the greatest ambassador for Britain and the Commonwealth that the world has ever seen. She has personally made over 250 international tours and visited more than 115 countries to help to strengthen the bonds of friendship between nations. After her coronation in 1953, the new Queen and Prince Philip embarked upon a seven-month royal tour in which they travelled over 40,000 miles by land, sea and air.  The last stop of their epic journey was Gibraltar, and it was there that they boarded their new royal yacht, Britannia, for the first time, for their journey home.

Another great Ambassador for Britain is the gold coin that shares the monarch’s royal title. The sovereign first appeared in 1489 when King Henry VII wanted a majestic symbol to demonstrate the wealth and stability of the Crown. Legend has it that he personally called for it to be named the sovereign so that it would always be closely associated with the prestige of the monarch.

The sovereign was struck by his successors until 1603. It then lay dormant for just over two centuries as the authority of the King to rule by divine right was tested by gunpowder plot, Civil War, regicide and restoration. It reappeared in 1817, in a Kingdom united by Acts of Union, in which monarchs reigned, and Parliament ruled according to an unwritten but accepted constitution. As the United Kingdom championed the Industrial Revolution, the new modern sovereign, struck with accuracy and precision, championed our manufacturing expertise on the world stage.

As Britain grew into an Empire upon which it was said that the sun never set, the sovereign grew to become the most important coin in the world. Such was its appeal that it was struck, not just in Britain but also in Australia, Canada, India and South Africa. Not since the fall of the Roman Empire had the same coin been struck on so many continents and accepted as a trusted and stable currency in ports and markets across the globe.

After the First World War forced Britain to withdraw gold coins from circulation to pay its war debts, the sovereign later reinvented itself as a beautifully crafted commemorative for collectors. Today, the coin continues to stand as a testament to high artistry, technical excellence and our rich cultural identity. Commemorative sovereigns are also struck by British dependencies, and notable issuing authorities include the Isle of Man, Saint Helena and, of course, Gibraltar.

No history of the modern sovereign can be complete without reference to the great Italian artist who created the iconic depiction of Saint George and the dragon for the coin in 1817. Benedetto Pistrucci was born in Rome in 1784 and learned his craft as an apprentice for a cameo cutter in the city.  At fifteen, he enrolled at the Drawing Academy in Rome, where he won the first prize in sculpture. This brought fame, and lucrative commissions soon followed.  After a series of adventures across Europe, he found his way to London in 1816.

He quickly attracted the attention of many wealthy admirers who came to examine his work. One of them, Sir Joseph Banks, President of the Royal Society, commissioned a cameo of King George III cut in red jasper for a fee of 50 guineas. Fortuitously, Great Britain was about to embark on an ambitious Great Recoinage, and the Master of the Mint, William Wellseley-Pole, was looking for a talented engraver to design the new coins of the realm. When his friend Sir Joseph Banks showed him the impressive cameo of the King that Pistrucci had made, he knew that he had found his man.

As part of the Great Recoinage, the government scrapped the popular gold guinea and replaced it with the sovereign. Wellesley-Pole wanted the new coin to look very different from its predecessor. So instead of a typical heraldic design, he asked his new engraver to suggest a suitably majestic alternative for the new sovereign.  Pistrucci immediately proposed a patriotic interpretation of England’s patron Saint fighting the dragon rendered in the neoclassical Greek style that he adored.  His timing was perfect, and the suggestion met with the approval of the Mint Master, the Prince Regent and King George III.

Pistrucci’s Saint George was well received by the public. Unfortunately for the artist, when George IV ascended to the throne in 1820, Pistrucci soon found himself out of royal favour. The notoriously vain monarch didn’t like the coin portrait Pistrucci sculpted of him and wanted it replaced with a more flattering portrait, modelled on a marble bust created by one of his friends.

Pistrucci was outraged, claiming that copying the work of another artist would violate his artistic integrity. When the King helpfully sent him an equally flattering painting of himself to inspire him, it is said that the volatile Italian, after being ordered to hang it on his studio wall, stubbornly turned it to face the wall so that he couldn’t see it.

Ultimately, Pistrucci’s principled stand saw him replaced as a coin engraver by an artist who was prepared to give the King exactly what he wanted.  Pistrucci’s coin designs were replaced, and the sovereign lost its Saint George.  It wasn’t until 1871, sixteen years after Pistrucci’s death, that his masterwork made a welcome return on the sovereign. With very few exceptions, it has appeared on sovereigns struck every year since then.

In 2017, Gibraltar marked the bicentennial of the longest-serving coin design in British history with a gold sovereign bearing a new interpretation of Saint George and the dragon. The artist was Benedetto’s great-great-great-great niece Angela Pistrucci. She won a scholarship in 2016 to study at the internationally renowned Zecca School of Art in Rome, the same city in which her famous ancestor had learned his craft in the Eighteenth Century.  In 2019, the British Treasury granted the Italian Mint permission to strike a sovereign in Rome for the first time to mark the Pistrucci legacy. The coin was issued by Gibraltar and bore one of Angela’s new Saint George designs.

Now, after producing five unique designs for the Gibraltar sovereign, Angela has passed the baton to a talented new artist. Given the close association that the sovereign has with the finest traditions of Italian design, it is fitting that the artist has come from the Zecca School of Art in Rome.  The school held a competition to reinterpret Saint George and the dragon, and the winner was Lucrezia Delfini.

Appropriately for this important royal anniversary, Lucrezia has incorporated the reason for the greatest fight in numismatic history into her winning design.  For the first time on the sovereign, we see the beautiful princess that Saint George fought the dragon to protect.  On the 70th anniversary of the day when a Princess became a Queen, it is an act of supreme numismatic synchronicity that the 2022 Gibraltar Sovereign should bear both a majestic reworking of Raphael Maklouf’s acclaimed second coin portrait of Her Majesty the Queen and the first depiction on the sovereign of the young princess that England’s patron saint so valiantly protected.

One can only hope that with this much innovative artistry and quality craftsmanship on display, Benedetto himself would approve of the 2022 Gibraltar Sovereign struck here in London, where he created his Saint George and the dragon masterwork over two centuries ago.

To find out how you can own your very own exclusive one-year-only issue click here. 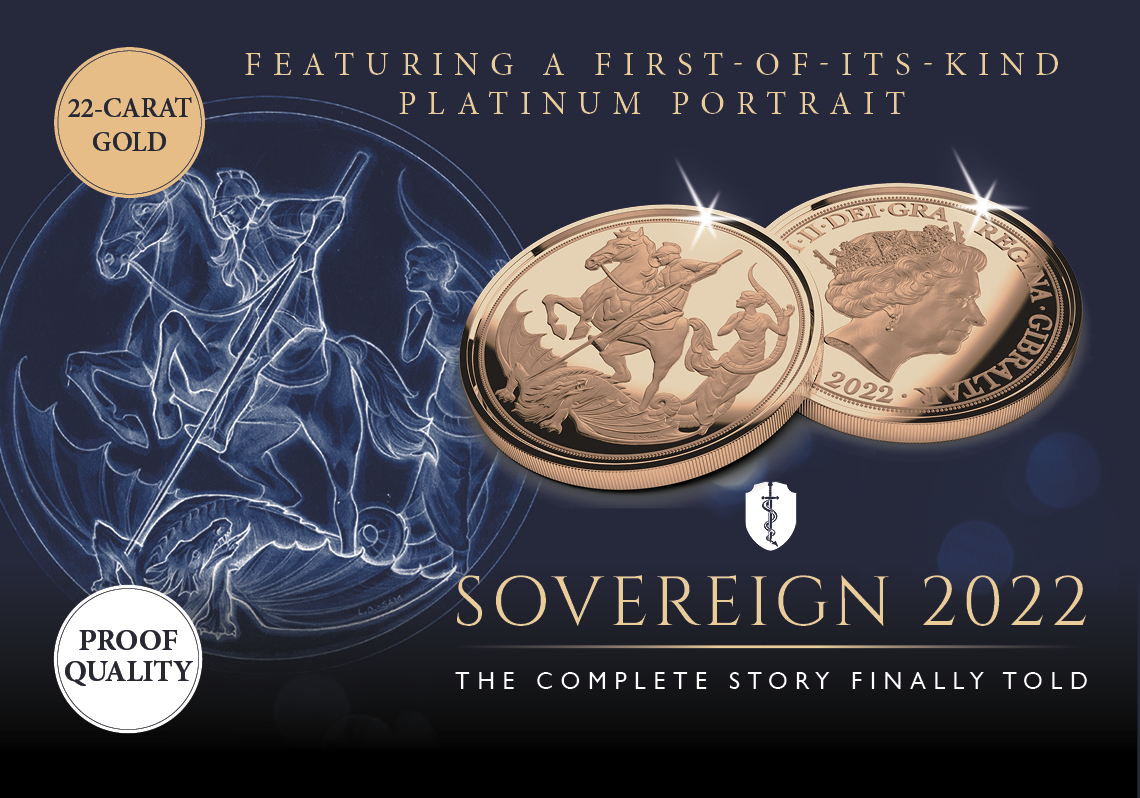