Announcement: The In Flanders Fields Museum and The London Mint Office partner with an exclusive coin to commemorate the centenary of the end of the First World War. 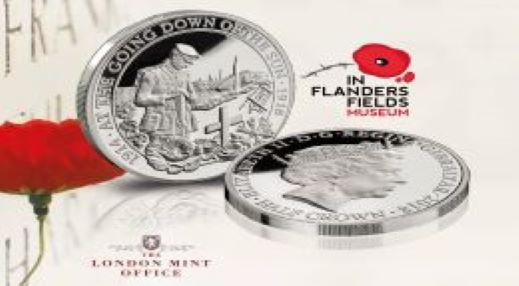 Own your very own FREE “At the Going Down of The Sun” Coin today! Click image below to claim now!

Over the past year, I have been lucky enough to visit the In Flanders Fields Museum on several occasions – my most recent trip was in May 2018 and I will soon be re-visiting again. With a keen interest in history, especially the First World War, the museum and its surrounding area of Ypres had always taken a top spot on my list of places to visit. The museum presents the war in all its brutal realities and is necessary is ensuring that our history is told to future generations. The building itself is remarkable and is a fitting place for the museum. On entrance you are provided with an interactive poppy wristband which is used to activate certain parts of the exhibition, giving you a more personal experience than many other museums. A large exhibition awaits you with artifacts from the 1914-1918 period and excellent films explaining various aspects of the war. In summary, this is a truly great museum where the war is viewed through the eyes of those who were involved. It is an absolute must see.

During the First World War the Cloth Hall, where the museum is currently located, was completely destroyed. A once thriving city had been reduced to mere rubble – the scenes were truly haunting. By the end of the war, the city of Ypres was left in a state of total devastation. The city was completely rebuilt after the Great War had ended, however the Cloth Hall wasn’t fully restored until 1967.

There are no longer any veterans of the First World War left and this makes it even more important to keep telling the stories of 1914-1918. Never before had such sacrifice been made for king and country – these sacrifices should never be forgotten. The In Flanders Fields Museum work tirelessly to keep these acts of courage and sacrifice alive and to ensure that generations to come understand and learn about the experiences of their ancestors as soldiers or civilians.

The museum is called the ‘In Flanders Fields Museum’ after the famous poem by John McCrae (1872-1918). The Canadian army doctor wrote his famous poem in an allied bandage post on the IJzer-Dieper canal. World War I, more than any other war had a strong association with poetry. Soldiers were forbidden from writing home with any degree of accuracy about the life they led, some put their thoughts into poems and McCrae’s poem is as poignant today as it was when written. After my visit to the museum and the town of Ypres, the true meaning of the poem dawned on me – the loss of fallen soldiers and civilians in one small area was truly devastating and unbelievable.

The museum tells the story of the First World War in all its bloody and harsh realities and stands as a permanent and living memorial of a conflict that must never be forgotten. The ‘Traces of War’ exhibition that is now on display is a must see. It concentrated on the Archeology of the First World War and shows more than 150 excavations from the Ypres area that have been brought to light in recent years. The excavated pieces all tell their own and often sad story.