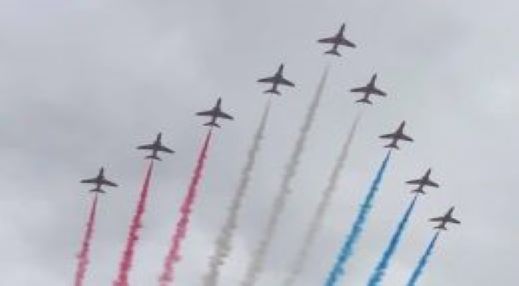 This year we celebrate the 100th anniversary of The Royal Air Force. The RAF was formed in 1918 during the First World War when the Royal Flying Corps and Royal Naval Air Service amalgamated to become the world’s first independent Air Force. Since then, the RAF has proudly served Great Britain and her allies with great distinction, keeping us safe and protected from harm. They do so by providing, in the words of their mission statement, “an agile, adaptable and capable Air Force that, person for person, is second to none”.

On Tuesday 10th July, I joined thousands of others in central London to witness the RAF 100 Flypast. It had previously been announced that historic aircraft including Spitfires and Lancaster Bombers would be joining some of the RAF’s most state-of-the-art aircraft in this unique event.

With the presence of the Royal Family and an estimated 65,000 – 70,000 crowd gathered, the excited atmosphere built as the countdown to the 1pm start began. The mass display featured a range of aircraft, which marked different eras of the 100 year history of the RAF. It paid the perfect tribute to the longest independent air force in the world and reminded us of the bravery of those who take to our skies to defend and serve our nation.

To finish the event, Squadron Leader Martin Pert Red 1 led the Red Arrows across the skies of London and up the Mall to bring an end to what was a truly spectacular flypast. The thousands who gathered in several key locations around London applauded, cheered and looked up to the sky in awe at the event they had just witnessed.

Earlier this year I also had the privilege of meeting Britain’s last remaining Dambuster Johnny Johnson MBE who spoke with us about his time in the RAF during the daring Operation Chastise in World War II:

We are very fortunate to have a country with a history of innovation, technology and brave individuals that have made the Royal Air Force what it is today!