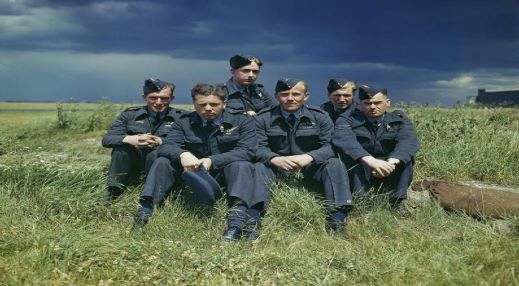 We are very excited to share this blog with you, transcribed from an interview between George ‘Johnny’ Johnson MBE and Falklands War Veteran Simon Weston CBE. It talks about Johnny’s time within the Royal Air Force:

I left school at the end of 1939 and went to work as a trainee assistant park keeper as Basingstoke Park. It was my ambition to be a superintendent of a large park. But before long, I began to wonder if I ought to be getting into the war. I hated Hitler to start with and thought I ought to be trying to give him a bloody nose. After seeing television programs of trench warfare in the First World War the army did not appeal to me at all. And I don’t like water, so the Navy was out too.

I volunteered for the Royal Air Force. I didn’t want to be a pilot so I did the gunnery course, and when I finished my training I was posted direct to 97 Squadron as a spare gunner. This meant I had to fly with anybody who didn’t have a mid-upper or rear gunner for that night’s operation.

The squadron had just been re-equipped with Lancasters and they were looking for the seventh member of the crew, the bomb aimer. They were training at a local airfield and I thought I would have a go at that. I passed the bombing leaders course and became the bomb aimer. The crew I joined had an American pilot, Flight Lieutenant Joe McCarthy who, at 6ft. 3in was big in both size and personality.  We were to discover that he was equally big in pilot ability, which gave us tremendous confidence, as wherever we went I always thought that Joe would bring me back. He and I became very good friends.

My responsibility in the crew was to get the bombs as near as possible to the target. Whatever was going on outside did not cross my mind at all; my concentration was the target and that is where it stayed until the bombs were gone.

We were approaching the end of our first tour when Wing Commander Gibson rang Joe and asked if he would consider joining a special squadron that he was forming for one special trip. Joe said that he would have to ask the crew, which he did and we agreed to go with him.

I was looking forward to tour leave because my fiancée and I had agreed to get married on April 3rd 1943. However when we got to Scampton the first thing we were told was that there was no leave.  When I wrote to Gwyneth to tell her that we had agreed to join a special mission, the answer I received was that if I wasn’t there on April 3rd – don’t bother! I thought, “Oh God, there goes my wedding”. But Joe took us all up to Gibson’s office and said, “We just finished our first tour, we are entitled to a week’s leave.  My bomb aim is supposed to be getting married on the 3rd of April and he is going to get married on the 3rd of April!” We got our leave, I got my wedding and that was our inauguration into 617 Squadron.

We were told from the beginning that we would not know what the target was until much later in the training. We were also told there had to be absolute security – we were not allowed to talk to anyone about what we were doing.

The most interesting thing we knew about the mission was that it required us to train at a low level – the height prescribed was 100ft. In Lincolnshire there is a town called Sutton Bridge, so called because the bridge into town goes over the canal. As you fly up from the south there are electric cables that go across the canal. One resident told me that the town was scared stiff by all the low-level aircraft going over the bridge.

The bomb aimers had to make their own bomb site; a triangle of plywood with a peg in each angle but the distance between the two peg pins had to be particular. We started off at a prescribed height of drop of 150ft and directed the pilot until the base pins were in line, then BANG – bomb gone. They were practice bombs of course. If you got it right then fine, but if you didn’t you did it again, and again and again until you got it right.

In the meantime, our special aircraft arrived. They were still Lancasters but had no mid upper turret.  The bomb doors were virtually sealed, and there were two odd legs standing just behind the nose cone on either side of the fuselage. Then the bomb arrived looking like a glorified dustbin and could see that the legs were to carry the bomb.

We did a series of cross-country map reading. I could never understand how you were supposed to map read over the North Sea, because that was where one of the turning points was. You have to be very sure you left our coast at the right place and hope like hell you get back in the right place. We trained in a twilight situation where all the windows in the cabin were covered in blue sheeting and the pilot and the bomb aimer wore night vision glasses. When it came to night flying practice it had to be in bright moon light. Map reading in the dark is a bit difficult, but we got to a stage were Gibson thought we were ready to go.

One Saturday night the whole squadron was called into the Operations Room and we met Barnes Wallace for the first time. He showed us a film of how he had developed the bouncing bomb and told us some details about it. It weighed 9000lb of which 6500lb was explosive with two depth fuses to explode at a depth of 25ft of water and a self-destruct fuse. The bomb had to be rotated backwards at five-hundred revolutions per minute and dropped exactly at 60 feet at a ground speed of 200 knots. Those were the conditions in which the rotating bomb had to be dropped.

In the briefing room there were models of the Möhne Dam and Sorpe Dam, but the one of the Eder Dam hadn’t been finished so wasn’t there. On the wall was a map which showed two routes and only one route out of the valley where the dams were. We were told that the two routes were to be used to confuse the Germans into thinking that a larger raid was taking place.

Gibson explained that he would take off with two other aircraft and head for the Möhne Dam.  Afterwards six more teams would follow him. If the Möhne hadn’t been breached they would carry on the attack. If it had they would proceed to the Eder Dam. That was nine aircraft. The next five were briefed for the Sorpe Dam, which was different from the others as it didn’t have towers. With nothing to sight on we were briefed to fly down one side of the hill, fly along the water and drop the bomb as near to the centre of the dam as we could.