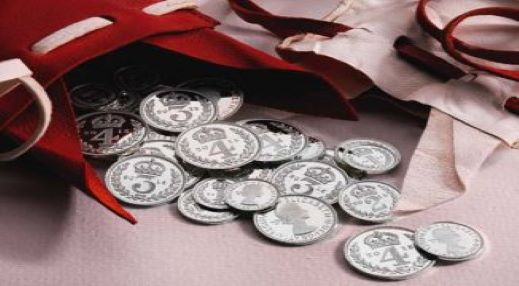 Apart from the monarch’s effigy, the design of all Maundy denominations has not altered since 1822 — the reverse features a numeral denoting its face value within a wreath. Maundy money still bears The Queens first portrait by Mary Gillick.

Traditionally, every Maundy Thursday Her Majesty the Queen distributes small leather purses to a  small select group of men and women.  Inside the purses are four small legal tender silver coins, struck especially for the ceremony at the personal request of the Queen herself.

Maundy coins are very special.  They are steeped in royal tradition and no other coins can claim to have such a direct personal connection to the Queen.  She signs the order for The Royal Mint to produce them and then distributes them to the recipients, traditionally pensioners selected for their service to the church or community.

With so few Maundy coins struck each year, and their recipients naturally keen to treasure a gift that has been personally presented to them by the monarch, these treasured pieces of British history rarely appear on the market, and when they do, they are always highly collectable.  They are so rare that few people ever get to see them, much less hold them in their hands.

The Gift of Love

The ancient ceremony of Royal Maundy can be traced back to the Bible, and specifically to the last instructions given by Jesus to his disciples on the Thursday night before his crucifixion the following day.

This instruction forms the opening words of the Maundy ceremony and the word Maundy is derived from the Latin ‘mandatum’ meaning command. The Royal Maundy gifts are to fulfil Jesus’ command given to his followers to love one another.

The practice of demonstrating Christ’s love to the poor on Maundy Thursday can be traced back to the fourth century when deserving recipients had their feet washed and were presented with gifts of food and clothing. The first recorded instance of a monarch personally taking part in the ceremony was in Rochester in 1213, when King John presented 13 poor men with 13 pence and washed their feet on Maundy Thursday.  By the time of the Tudor era, the monarch’s attendance at the Maundy ceremony had developed into a regular custom, and the event had become known as “Royal Maundy’.

The tradition of making the number of Maundy recipients equal to the monarch’s age appears to have started in 1363 when the then fifty-year-old King Edward III presented gifts to fifty poor men.   This tradition was made an official decree by King Henry IV and has been a central part of the Maundy service ever since. It is why in 2019  the 93-year-old Queen distributed Maundy money to 93 men and 93 women.

The Tudor monarchs introduced a custom in which one particularly deserving Maundy recipient was given their Maundy robe at the end of the ceremony.  This practice was stopped by Queen Elizabeth I who substituted the gift of her robe for twenty silver shillings. Henceforth, it became the custom for the monarch to bestow a second monetary gift, which meant that a second purse was required. The red purse that had been used to contain the gift of pennies was now used for silver shillings and a new white purse was introduced to contain the pennies. The additional monetary allowance in place of the Maundy robe was suspended in 1731 but reinstated in 1759, where it has survived to the present day.

The presence of the monarch at the Maundy ceremony waned during the later years of the reign of King Charles I and between 1649 and 1660 there was no monarch in England to participate in the ceremony.  Following the Restoration of the Monarchy, the new King, Charles II was very keen to revive the Royal Maundy tradition and personally distributed money and gifts to the poor.  He even restored the practice of washing the feet of the poor in person, though this did not last.  It is believed that his brother and successor King James II was the last monarch to personally wash the feet of the poor in 1685.

Until the joint reign of William and Mary in 1689, the sovereign had participated in annual Maundy ceremonies for four centuries.  However, there is no record of any participation by a monarch at a Royal Maundy ceremony after 1698 until the Twentieth Century.  Queen Anne was too infirm to attend and the Hanoverian monarchs were content to send a representative from the Royal household.  While George III and a young Queen Victoria both attended the Maundy ceremony on at least one occasion as spectators, neither took an active part in the service.

At the start of Queen Victoria’s reign in 1838, the decision was made to replace the gift of food with money.  Clothing was still distributed as part of the ceremony until 1882 when this was replaced by an additional monetary gift.   From then on, only coins have been presented to recipients during the ceremony.

To avoid the Royal Maundy becoming an ‘empty’ ceremony, it was deemed essential to restore royal connections with the service. In 1932 King George V became the first monarch since the 17th Century to personally present Maundy purses to their recipients.  In 1936 King Edward VIII distributed Maundy money at Westminster Abbey, one of the very few public commitments undertaken during his short one year reign. The coins used in the ceremony bore the image of his late father; he abdicated before any coins could be issued bearing his likeness.

As the gift of money was always intended to be spent by the recipients, coins used before 1670 were no different from those struck for circulation.  In medieval times only the penny and the groat (fourpence) were presented to the deserving poor.  In 1551, the threepence was added, and in 1662 King Charles II issued an undated set of hammered coins comprising the fourpence, threepence, twopence and penny.  However, it was not until 1670 that a dated set of all four especially struck coins appeared together for the first time.

The design of Maundy coins varied under the first eight monarchs to strike them.   Charles II’s Maundy coinage displayed an interlinked letter ‘C’ on the reverse of the four silver Maundy coins, with the number of initials corresponding to the face value of the coin. For example, the fourpence featured four initials, the penny just one. This style continued under James II until 1688, replacing the letter ‘C’ with the letter ‘I’.

During the reign of William & Mary in 1689, an unnamed artist changed the reverse design to depict a crowned numeral.  After the 59 year reign of King George III which saw four different designs used, coin engraver Jean Baptiste Merlen placed the crowned numeral within an oak wreath for the 1822 Maundy coinage. The crown was slightly altered in 1888 but since then the reverse design and size of the Maundy coins have remained unchanged making it the longest continuous coin series in British history.

Maundy coins were the only four British coins that did not change shape, size or design when the nation adopted the decimal currency.   On Decimal Day, 15th February 1971, the old system of 20 shillings and 12 pence to the pound was replaced with 100 new pence in the pound.  A new set of decimal coins were introduced, but the Maundy coins remained unaffected by the change.  Each coin simply retained its numerical value as ‘new’ pence.

During her long reign, Queen Elizabeth II’s portrait has undergone five changes on ordinary circulating coins.  However, every Maundy coin issued during her reign has used the original circulating portrait by artist Mary Gillick first issued in 1953, the year of the Queen’s coronation.  Gillick’s iconic depiction of the young monarch wearing a laurel wreath is now the longest-serving Royal portrait in British coinage history.

The fact that Maundy coinage has always had such a personal connection to the monarch may explain the reluctance to change it, and so the Gillick portrait has remained an unchanging part of British coinage over the past sixty-five years.

An Enduring Legacy in Silver

The silver Maundy money provides an important connection with the very first coins struck in Britain over 1,300 years ago.  Silver began to be used in English coinage in the seventh century and for almost five centuries the silver penny was practically the only coin issued in England.  The fourpence was added in 1279, the twopence in 1351 and the threepence in 1551.  All were struck in sterling silver, with only a brief interruption when Henry VIII debased the coinage.   When the nation’s circulating coinage moved from silver to copper in 1797 the four Maundy coins continued to be struck in sterling silver.

In 1920 the price of silver had risen dramatically and the silver content of all British silver coins, including Maundy money, was reduced from sterling silver (92.5%) to 50% silver to ease the financial burdens caused by the First World War.   In 1947, the decision was made to replace all silver circulating coins with silver-coloured cupro-nickel coins.  However, the original silver content of the Maundy money was reinstated, as it was felt that a gift from a monarch should be in sterling silver.  This indicates the significance of the Maundy coinage and its unique place in British history.

Today’s silver Maundy money is an enduring legacy of a coinage standard maintained, with one brief interlude, from Saxon times.

During the Royal Maundy ceremony, The Queen personally gives each pensioner a red purse and a white purse.  The red purse contains a total of £5.50 in circulating currency representing the robe, food and clothing allowances.  The white purse contains the Maundy coins minted especially for the occasion.

A Maundy set comprises one each of the four Maundy coins, having a total face value of ten pence. Each set represents ten years of the monarch’s age, and each recipient is given one set of Maundy coins for every decade she has lived, with any remaining years represented in single coins.

Given their strong royal connection and unique place within the history of British coinage, is easy to see why Maundy coins are so special.

If you are interested to hear more about Maundy Money, visit: https://www.londonmintoffice.org/maundy3