Alexander the Great Gold Stater – The coin used around the world 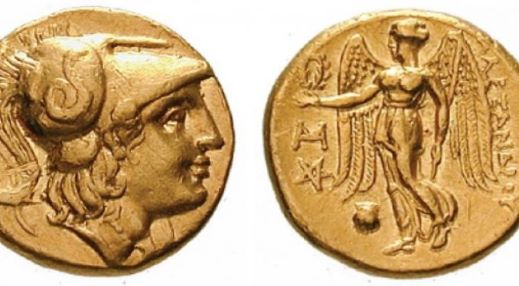 Considered one of the greatest military leaders of world history, Alexander never lost a battle. When he inherited the throne of Macedonia at the tender age of 20, he controlled an area that was similar in size to modern day Greece. By the time of his death, a mere 13 years later, he ruled over virtually the known world. It was during his conquests of the known world that saw Alexander gain riches vast beyond imagining, and he turned his attention to conquering the world of coins.

Global coins for a global empire

Alexander wanted all the people across his empire to use the same coin. Across his vast empire, he established 26 mints, all with the explicit instruction to strike coins that looked the same. Previous successful coins such as the Athenian owl tetradrachm were used around the world, but what differed was that the coins of Alexander were struck everywhere. It is because of this that Alexander’s coins are often referred to as the world’s first global currency.

A message of REVENGE

Nearly 150 years before Alexander became king, the Greco-Persian War raged on. Armies of the Persian empire had reached the evacuated city of Athens, burning it, including the Parthenon, a temple dedicated to the goddess Athena, patron of Athens.

Taking a personal interest in the design of the coins, he chose a profile of the goddess Athena wearing a Corinthian helmet. When Alexander conquered the Persian Empire, it brought with it the riches of the Achaemenid dynasty. This was sweet retribution for Alexander, who, for that reason, chose the goddess of Victory to grace the designs of the reverse. The irony cannot be understated, using gold from the conquered Persians to strike gold coins emblazoned with the goddesses Athena and Victory. With a gold purity of around 98%, this is among the purest of gold found in ancient coins.

The stature and value of his coins were held in such high regard at the time, his successors continued to mint coins with the same design for the next 250 years.

We have an extremely limited number of this amazing artefact of history available. Minted over 2300 years ago, before the time of Christ, struck with gold war booty from the Persian Empire, don’t miss your chance to own this piece of history, call us on 0330 024 1001.