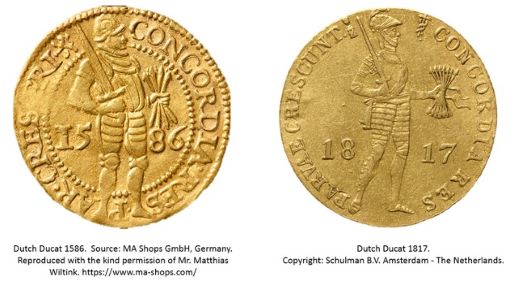 The Dutch ducat is a popular and instantly recognisable gold coin. Instead of depicting a monarch or saint, it shows an armour-clad soldier with a sword in one hand and a bundle of arrows in the other. The inscription surrounding the soldier Concordia Res Parvae Crescunt can be translated “Union makes small things grow”. The Dutch ducat was first struck in 1586 and continues to be produced today, making it the oldest continuously issued gold coin in the world.

However, the appearance of the soldier on this important gold coins has long been a mystery as the Dutch never relied on military force to build their Empire. Officially, he is anonymous. However, by reviewing the unique set of circumstances in which the coin was commissioned, a convincing case can be made for establishing the soldier’s identity and his appearance on the Dutch ducat.

His name was Robert Dudley, and he was an Englishman.

The Search for a Sovereign

In 1566, the seven northern provinces of the Low Countries began a long struggle to untangle themselves from the Spanish Empire. The Spanish tried to brutally crush the Dutch Revolt but were unable to prevent the unrest from gathering momentum. More and more people rallied to the side of William of Orange, leader of the Holland Province and, by 1581 the provinces felt that they were strong enough to declare their independence.

The provinces wanted a strong monarch who could unite them and protect them from King Philip II of Spain, who was determined to pull them back into his Empire by force. They invited Elizabeth I of England to become their Queen but she declined, having no wish to antagonise Philip who was her former brother-in-law. After a similar appeal to France failed, the provinces had no choice but to try to govern as a Republic instead.

In 1584 the popular William of Orange was assassinated by a man hoping to collect the large bounty put on his head by the King of Spain. The murder caused political turmoil that threatened the fledgeling Republic and left it even more exposed to Spanish aggression. One of William’s friends was the wealthy English Earl of Leicester, Robert Dudley. He and Queen Elizabeth were childhood friends, and he now enjoyed a privileged position at court as one of her closest advisors. It is highly likely that they were also lovers.

Leicester eventually persuaded the Queen to provide the Dutch Republic with the support it desperately needed. In 1585 she agreed to supply 6,400 soldiers, 1,000 cavalry and an annual subsidy of 600,000 florins. Much of the money came from, Leicester’s personal fortune and Queen appointed him head of her army in the Netherlands.

When Leicester arrived in the Netherlands in December 1585 he was welcomed like a King. Lavish festivals were held in his honour and cheering crowds followed him wherever he went.  The following month, he was offered the title Governor-General and accepted “the rule and government general” without first consulting the Queen.  As one of Elizabeth’s subjects, by accepting the position he effectively made her the Queen of the Netherlands! Elizabeth was furious and initially commanded Leicester to resign the post. But the provinces pleaded with her to let him stay, claiming that this was the wish of the Dutch people. Eventually, she relented and wrote to the provinces asking them to follow the Earl’s advice in matters of Government.

With Amsterdam’s reputation as a major centre of international trade growing the demand for a uniquely identifiable Dutch coin grew along with it. On October 4th 1586, Leicester ordered that a Dutch ducat be designed and struck.

Without a monarch of their own, it appears highly likely that the Dutch used an image of their new Governor-General on their new gold coin. Leicester literally was their knight in shining armour, and so this is how they chose to depict him. He wears armour because he is the head of the army. He carries a sword because he is defending them from Spanish aggression. He holds arrows in his hand to symbolize the provinces that he had united by becoming their Governor-General.

Contemporary illustrations of the Earl of Leicester further support the theory that he is indeed the soldier on the world’s oldest continuously issued gold coin. A sketch made in 1575 depicts him in an expensive suit of tilting armour with a plumed hat that appears to closely resemble the figure on the coin struck in 1586. Also, an engraving of him on horseback in 1586 suggests that he had become overweight, which may explain why the soldier on the coin has a significantly fuller figure than a typical soldier.

Despite his best intentions, the Earl of Leicester ultimately proved to be a major disappointment for the Dutch. The Queen stopped him from instigating any aggressive action against Spanish soldiers which seriously hampered his chances of defending the Netherlands from their attacks, as he had to wait for them to attack first before he could respond. Eventually, in December 1587 he asked the Queen to let him come home. He returned to England heavily in debt, having been unable to provide the Dutch with the support they needed.

Elizabeth’s reluctance to take any action that could be perceived by Spain as a hostile act ultimately proved futile. King Philip II had already begun preparing a full-scale invasion fleet to conquer England and bring her reign to an ignoble end. She put Leicester in charge of defending England from the forthcoming invasion, and he arranged for her to rally the troops at Tilbury. With Leicester standing at her side, she boldly declared, “I know I have the body of a weak and feeble woman, but I have the heart and stomach of a king – and of a King of England too”.

The Spanish Armada was defeated at sea before reaching English soil and afterwards, Leicester was seen riding in splendour with the Queen through London and dining frequently with her. On September 4th 1588 he died suddenly at the age of fifty-six. Elizabeth was inconsolable and locked herself in her bedroom for several days until her worried staff broke the door down. She mourned him for the rest of her life, and his last letter sent six days before his death remained close to her bed until her own death in 1603 brought the Tudor dynasty to an end.

Meanwhile, Dutch ducats continued to be struck, but the soldier that appeared on them became noticeably slimmer. If Leicester was the original subject then the reason for the dramatic weight loss becomes clear. It was an intentional act to conceal his identity. An attempt, perhaps, to airbrush from the collective Dutch consciousness the memory of the time when they enthusiastically welcomed an English Earl as the head of their Government and, by doing so made the English Queen their unwilling Sovereign.

After so much rejoicing at his appointment, the failure of the English Governor-General and the indifference of the English Queen to their plight would have been a bitter blow for the Dutch. It is highly unlikely that they would have wanted to immortalise such a painful chapter of their history on their most important gold coin, which continued to be produced during the bitter Anglo-Dutch Wars that were waged throughout the seventeenth and eighteenth centuries.

Perhaps this explains why the soldier on the Dutch ducat remains officially anonymous to this day.