Coin of the week: The Caius Julius Caesar Elephant Denarius 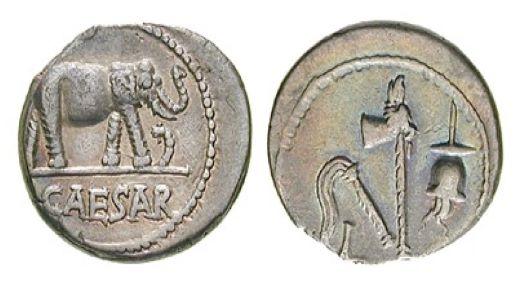 Julius Caesar, was a military general who used his military prowess and political skills to bring down the Roman Republic, and set the foundation for the establishment of the mighty Roman Empire. Having being extremely successful in military campaigns in Gaul, the Senate became worried about his power and ambition. In January 49BC, the Roman Senate ordered Caesar to disband his armies. Julius Caesar ignored this order and crossed the river Rubicon in northern Italy with his legions on his way to Rome. This was a declaration of war against Rome and over the next four years Caesar fought a fierce civil war against his main enemy Gnaeus Pompey Magnus.

Caesar’s military campaigns were financially costly, and he needed vast sums of silver to pay his legions. Caesar took over the State treasury at the Temple of Saturn in Rome, and stripped it bare.  From this hoard Caesar minted the “Elephant” denarius, and used them to fund his armies and campaigns. For the first time since the introduction of coinage in Rome, a military leader claimed the right to mint coins on his own will.

These coins therefore have huge historical importance – they were minted by Caesar to pay his troops, to fight the civil war that led to the setting up of the Roman Empire.

The symbol of an elephant on the obverse has three possible meanings, all pointing to Caesar striking this coin as part of self-promotion: 1) Legend had it that the founder of Caesar’s family killed an elephant single-handedly.  2) Caesar’s rival Pompey had recently tried to enter Rome on a chariot drawn by 4 elephants, since the gate was too narrow, the entrance was a huge flop. This coin was designed to highlight Pompey’s shortcomings. 3) The elephant represents the might of Caesar and his legions, trampling a snake which represents the enemy. The elephant defeating  the snake is symbolising the fight of good versus evil.

Obverse: Depiction of an elephant trampling a snake. The inscription ‘CAESAR’ below the elephant.

If you are interested to learn more about Roman coinage, or to build your own Roman coin collection – our experts are available to help. Call Free on 0330 024 1001, or leave a comment below and we will be in touch!