Coin of the Week: Una and The Lion 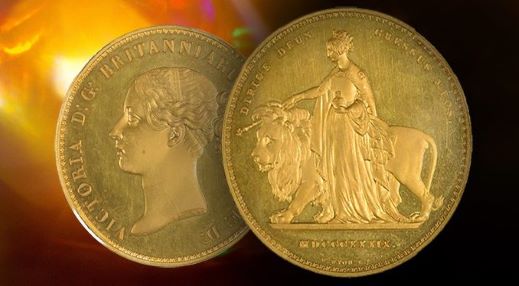 In 1839, the gold Five Pounds depicted a remarkable interpretation of Una and the Lion by William Wyon on its reverse.

The story can be found in Edmund Spenser’s epic and multi-layered poem ‘The Faerie Queene’ first published in 1590.  Una, the personification of truth and virtue is protected from danger by a fearsome Lion who is captivated by her beautiful face.  Widely considered one of the most beautiful British coins ever issued, the Chief Engraver took the bold step of depicting Queen Victoria as the innocent Una guiding the great lion, which represents England.

Wyon’s decision to depict the new Queen as the heroine of a famous Elizabethan poem was clearly intended to present Victoria as the new Virgin Queen, innocent yet brave and self-confident, and ushering in new Golden Age of prosperity.   The coin was immediately hailed as a masterwork but was never struck again.

The following year, on 10th February 1840 Queen Victoria married Prince Albert of Saxe-Coburg and, as a married woman, it was considered inappropriate to continue depicting her as an innocent virgin.

In January this year an Una & the Lion coin sold at auction in the U.S for a whopping amount, find out how much here:
https://londonmintofficeblog.com/blog/the-british-coin-at-auction/