Alan Turing revealed as the new face of the £50 note 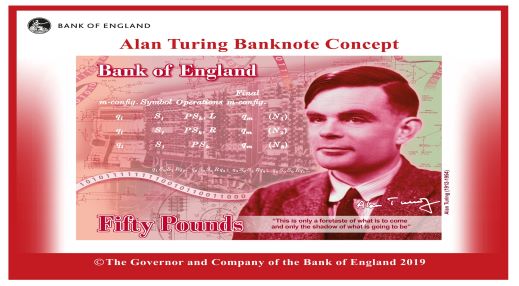 Alan Turing, who helped to crack German encrypted codes in World War II, ensured the survival of Western civilisation in the face of Nazi occupation. Now, he has been chosen by the Bank of England to be the new face of the £50 bank note.

Alan Turing’s efforts during World War II helped ensure the victory of Britain and the Allies against Nazi Germany. Turing’s work at Bletchley Park helped to decipher German codes, including how to find the settings for the Nazi’s ‘Enigma’ machines. By cracking these codes, important information was relayed back to the Allies and enabled them to anticipate German attacks. Sir Winston Churchill said that Turing’s work at Bletchley Park had shortened the duration of the war by around two years.

Despite this however, Turing’s life came to a tragic end after he was arrested in 1952 for committing homosexual acts, as homosexuality was still illegal in Britain at this time. After his arrest, Turing was chemically castrated and committed suicide in 1954, at the age of just 41.

Now however, the news that Turing will be the face of the new £50 bank note – as well as being awarded a posthumous pardon in 2014 – sees Turing finally receive the respect and recognition he did not receive in his own lifetime.

Chosen from a list of 1,000 possible candidates, Turing’s portrait on the new £50 bank note was unveiled today by Mark Carney, the Director of the Bank of England.

“Alan Turing was an outstanding mathematician whose work has had an enormous impact on how we live today,” Carney said. “As the father of computer science and artificial intelligence, as well as [a] war hero, Alan Turing’s contributions were far ranging and path breaking. Turing is a giant on whose shoulders so many now stand.”