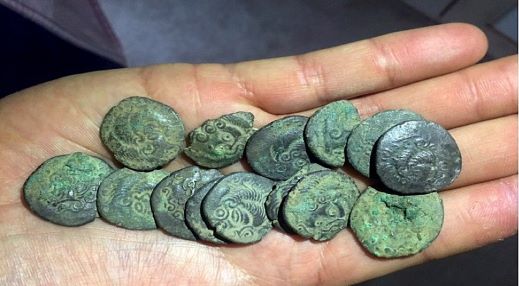 A hoard of Iron Age coins discovered on Jersey has been valued at up to £2.5 million, but it’s finders hope its actually worth a lot more

A collection of some 74,000 coins discovered on Jersey has been valued by the at up to £2.5million. Upon discovery in 2012, initial estimates had the value of the hoard – which dates from the first century BC – at £10 million. That figure has now been downgraded by the UK Treasure Valuation Committee, part of the Department of Culture, Media and Sport.

However, the initial discoverers of the hoard – Jersey natives Reg Mead and Richard Miles – are hoping of a re-evaluation of at least £7 million, based one estimates that the least valuable coin in the collection if worth £100.

The hoard is declared as ‘treasure,’ as defined by the Treasure Act of 1996. This means that the content of the hoard officially belong to the Queen, but its finders are entitled to a reward,