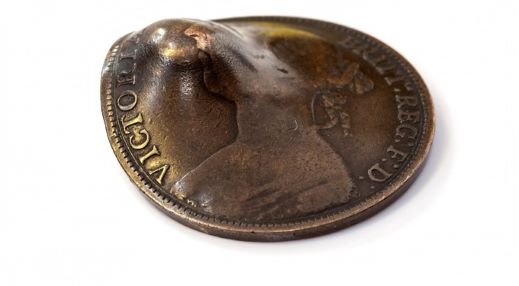 An auction battle has taken place for a very lucky penny that saved the life of a soldier in WWI.

Any coin collector worth their salt knows the value of coins. However, the worth of this particular penny is innumerable, given that it saved the life of a soldier in the First World War.

Private John Trickett had a very lucky escape in battle, when a penny from 1889 in his breast pocket blocked a pistol bullet aimed at his heart.

Upon hitting the penny, it ricochetted up through Private Trickett’s nose, exiting through the back of his ear, which left him deaf.

This very special coin sparked a tense auction battle when it went up for sale, eventually being bought by Private Trickett’s own grandson, Nigel, who was up against six phone bidders for the penny in question, including one from America.

Mr Trickett bought his grandfather’s lucky coin, along with a collection of other items including war medals. The coin was initially thought to only fetch £30-£50 at auction, but after a bidding war, it was bought for over £5,000.

Private Trickett died one year before the birth of his grandson, but Nigel can clearly remember his grandmother showing him the lucky penny at the age of seven.

“We want to keep the medals and penny in the family to be handed down,” he says. “It’s where it belongs and we’ll take pride in showing it to family members.”

On the way home from the auction, Mr. Trickett took the collection to his grandfather’s grave in Bolton-On-Dearne.

“Coins are windows to history, and this dented penny has an astonishing story to tell us. We can see the true horror of war reflected in its damaged metal,” says our very own historian Justin Robinson. “Private Trickett’s decision to put the coin in his breast pocket on that fateful day not only saved his life, but it provides all of us with a valuable insight into what he experienced. I am delighted that the coin is back in the family where it belongs, and where I’m sure it will be treasured for many generations to come.”