The Most Famous Artist You May Never Have Heard Of. 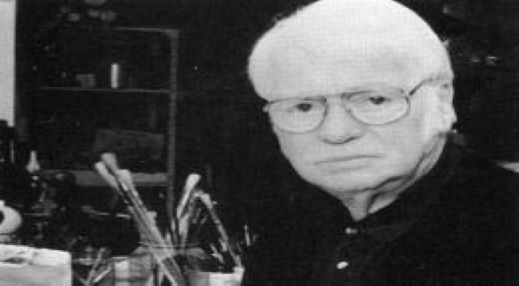 When I was boy, I remember being intrigued by the image of a man with an outrageous mane of long hair and a large book on his lap. He appeared on a banknote that a visiting aunt had presented me with, and before exchanging it for a large bag of sweets at the local corner shop I asked my mother about him.

She explained with a laugh that the owner of the extravagant wig was Sir Isaac Newton, the brilliant mathematician and scientist who had developed the theory of gravity. Gravity, my mother explained, was the invisible force which kept everything grounded on the earth and stopped us from floating off into space. At the time I quite fancied the idea of floating in space, and so I felt a bit resentful of Newton and gravity until it was pointed out to me that he hadn’t actually invented it!

This early childhood memory demonstrates the genius of commemorating notable figures from history onto our currency. These days, British schoolchildren get tragically little exposure to the history of this country in the classroom. When my daughter studied GCSE history a couple of years ago she learnt about Germany, the USA and South Africa, but her exposure to British history was limited to a single module on Jack the Ripper! It is therefore reassuring to know that the legacy of some of our most influential Britons are commemorated on our currency, so that our children will see them and learn what makes them so important.

Given the large number of commemorative coins issued these days it is easy to forget that the practice of celebrating worthy individuals on legal tender is a comparatively recent one. In fact, the first non-Royal ever to be depicted on British currency was Sir Winston Churchill shortly after his death in 1965. The Churchill crown proved very popular with the public, and just five years later in 1970, the Bank of England began issuing banknotes featuring notable figures from British history.

The job of designing the new pictorial banknotes (which became known as Series D) was given to the talented artist Harry Eccleston (1923-2010) who became the Bank of England’s first full-time in house artist in 1967. Given the fact that everyone carried his artwork around in their wallets and purses forty years ago, it has always surprised me that Eccleston never became a household name.

The exceptional quality of his craftsmanship is particularly evident in his stunning portraits of Her Majesty the Queen, which involved several royal sittings at Buckingham Palace, which have set the bar for all future banknote artists.

This year, The London Mint Office is paying tribute to Eccleston’s remarkable artistry by releasing commemorative reproductions of the Series D banknotes that he designed for the Bank of England. Each of his beautiful creations have been reproduced in fine detail and beautifully printed on 24 carat gold. (Click Below Image To Find Out More!)

The Great British Icons – UK Banknote Firsts Edition includes Eccleston’s designs for the £1, £5, £10, £20 and £50 banknotes issued between 1970 and 1981. Together, they commemorate the giants of literature, warfare, nursing, science and architecture that helped to put the ‘Great’ into Great Britain.

The first of Eccleston’s designs to appear was the new £20 note issued in July 1970 and featured William Shakespeare with the famous balcony scene from Romeo and Juliet. Ironically, Shakespeare wasn’t intended to be the first historical figure to appear. Six years earlier, the Bank of England had approved Eccleston’s design for a ten shilling note featuring the explorer and author Sir Walter Raleigh. However, this particular design was shelved when the decision was made to strike a fifty pence coin instead, and Sir Walter is still waiting for his turn to appear on a banknote.

In November 1971 the Duke of Wellington appeared on the £5 note, followed by Florence Nightingale on the £10 in February 1975. Sir Isaac Newton arrived on the £1 in February 1978 and Sir Christopher Wren rounded off the Bank of England’s Series D collection with the launch of the £50 note in March 1981.

In 1979 Eccleston received an OBE in recognition of his services, but remained extremely modest of his banknote designs for the rest of his life, always generously praising his engraving colleagues at the Bank of England for their skill in translating his artwork into legal tender. He once wrote about “how different security engraving is from normal engraving, particularly in the control of line spacing. To see your drawing turned into this was unbelievable.”

In a year where the question of what it means to be British dominates the current political agenda, it is particularly fitting that Harry Eccleston’s iconic designs of the Great Britons who, in their own unique way, have each helped to shape our national identity are now available to own in a stunning commemorative collection.

Want to own the First Iconic One Pound Bank Note Printed in 24 Carat Gold? – Click here to find out more!