Roman Hoard found in Derbyshire declared to be ‘Treasure’ 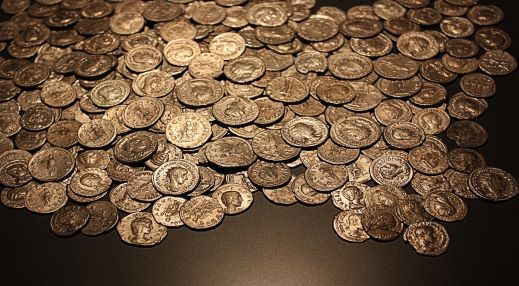 A large quantity of Roman coins was found by two metal detectorists in a woodland area of Derbyshire. Following an inquest at Chesterfield Coroner’s Court held on January 21st 2019, the coins have been officially declared as treasure!

The 2006 Treasure Act classifies hoard coins as treasure when “all coins from the same find… are at least 300 years old when found … and there must be at least 10 in the find”. This Roman Hoard, comprising 260 ancient coins estimated to originate from as early as 300 AD, certainly fulfills this criteria!

The majority of coins have been dated between 330 – 340 AD, although one coin – a plated Denarius – has been dated back as far as the reign of Emperor Septimus Severus in 194AD! It is interesting to wonder whether the coins were buried as a ritualistic offering to the gods (common during this time period) or whether they were buried for safe keeping with the intention of the owner returning one day to retrieve their fortune.

It is also unclear whether the coins were a single deposit or were added to over time. Regardless of their origin, they make for an extraordinary discovery many centuries on and a great gift of history. The coins were donated to the British Museum in July 2018 by the metal detectorists.

With many new coin discoveries in many exciting places over the last few years- It makes you excited to see what piece of history may be discovered next!