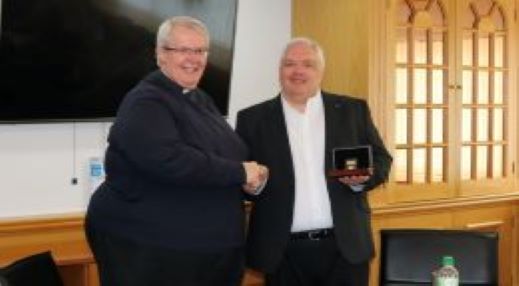 For as long as coins have existed, artists have been required to design them.  After all, a coin without a design is simply a blank piece of metal and therefore not a coin at all. The art of coin design is a demanding discipline that requires a high degree of technical accuracy and the ability to conceptualise a design in three dimensions.  Not every artist is suited for this work and even the most brilliant designers can struggle to create an image that can be fully realised on such a small canvas.

The Right Reverend Gregory Cameron is the Bishop of the Diocese of Saint Asaph in North Wales.  The former deputy secretary general of the Anglican Communion, once described by The Times newspaper as “arguably the most influential clergyman behind the scenes” has collected coins since childhood and combines this engrossing hobby with a passion for heraldic art.

Despite Bishop Gregory’s demanding day job, he is currently making a name for himself within the coin industry as a respected designer of heraldic themed coins. In 2016, one of his designs was selected to appear on the last round £1 coin.

His motif depicted the four royal beasts from the United Kingdom; the Welsh dragon, the English lion, the Scottish unicorn and the Northern Ireland stag. The four interlinked animals surround Saint Edward’s crown, a traditional heraldic symbol of Britain’s monarchy as if to protect and preserve Britain’s sovereignty.

Later that year, a £20 silver coin for Christmas designed by Bishop Cameron was issued.  It depicts the three wise men presenting their gifts of gold, frankincense and myrrh to the infant Jesus, and it is the first time that an image of Christ has ever appeared on a British coin.

In 2017, The London Mint Office commissioned Bishop Gregory to help them to commemorate the Platinum Wedding Anniversary of Her Majesty Queen Elizabeth II and Prince Philip.  His beautifully intricate designs featuring the coat of arms of both monarch and consort were issued by Gibraltar as a five gold sovereign set.

Bishop Gregory has also created designs for a stunning sovereign set to commemorate the freedom of the Falkland Islands. His unique depiction of their coat of arms together with the simple inscription, “They have the right to live in peace” was struck to mark the 35th anniversary of the Falklands conflict, and the gold coins have been described by veteran Simon Weston CBE as “magnificent”.

Another recent coin commission for Bishop Gregory has been to recreate some of the heraldic designs that appeared on gold sovereigns during the nineteenth century.  Four of these classic motifs appear in the new ‘Strength and Shield’ sovereign collection issued by Gibraltar. Together, they help to tell the remarkable story of the brilliant artists, feuding rivalries, powerful egos and changing public perceptions that have shaped the sovereign’s unique heritage with indelible distinction over the past two centuries.

One of Bishop Gregory’s reinterpreted designs pays tribute to the coin that never was. In 1853, a few trial pieces were struck for a proposed new gold quarter-sovereign. Ultimately, Queen Victoria’s government decided that the coin was too expensive to strike and too small to be used in circulation, and the project was scrapped.  Thanks to Bishop Gregory, the heraldic Royal Shield of Arms created in 1853 for the coin that never was has finally made it onto a gold quarter-sovereign at last, having waited 164 years to do so!

On a recent visit to The London Mint Office Bishop Gregory talked about his journey in the world of coin design and art telling the team that “Heraldry and calligraphy was my big interest growing up, and I believe it works very well on coins as it is the language of symbolism. And you can put a symbol on a coin that says far more than a picture”. During his visit Managing Director of The London Mint Office Greg Prosser presented Bishop Gregory with his very own Platinum Wedding Anniversary Sovereign.

The team at The London Mint Office had a great time talking with Bishop Gregory about his journey within the coin industry and look forward to welcoming him back very soon!