5 things you may not know about the Falkland's conflict 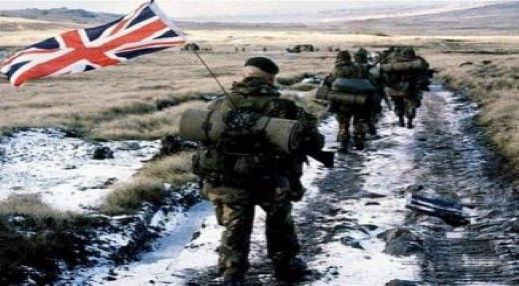 This year marks the 39th anniversary of the Falklands Conflict. Here are some facts you may not have known:

1: The Falkland Islanders Motto is “Desire the Right”
The first recorded sighting of the islands was made on 14th August 1592 by the British explorer Captain John Davis. His ship, Desire was heading for the Magellan Straits when they ran into a severe storm, blowing them off course. According to Davis’ journal,

“We were driven in among certain isles never before discovered by any known relation, lying fifty leagues or better from the shore East and Northerly from the Straits in which place unless it pleased God of his wonderful mercy to have ceased the winde we must of necessity have perished.”

The Falkland Island Coat of Arms

390 years later, Prime Minister Margaret Thatcher echoed the motto when she stood up in Parliament and announced that the British were sending a Task Force to liberate the islanders after Argentina had invaded them.

They proposed the idea of a ‘leaseback’ in which the islands would be given to Argentina and then leased back by Britain for a 99-year period. But this proposal was rejected immediately by the islanders who, understandably, had no wish to cede any sovereignty to a fascist military junta responsible for killing thousands of its own people.

3: The Argentine Occupying Force made islanders drive on the wrong side of the road
During their occupation of the Falkland Islands, the Argentine Government deployed over ten thousand soldiers to the islands. They vastly outnumbered the native population by over 5 to 1 and put real strain on resources and infrastructure. Water was rationed, and the occupiers seized anything of value to their military campaign including land rovers, tractors, high-powered radios and, as the cold weather set in, food and clothing.

Spanish was made the official first language of the islands and all vehicles were ordered to drive on the right hand side of the road as they do in Argentina. Naturally, this caused chaos, and signs erected in Spanish did nothing to improve the situation. Eventually, the Argentines had to put up signs in English and paint arrows on the roads to indicate the direction of traffic. Despite this, many islanders continued to drive on the left, demonstrating both their defiance and their determination to remain British.

4:  The General Belgrano survived the Japanese Attack on Pearl Harbour
The General Belgrano was a formidable ship. Before the USA sold her to Argentina in 1951 she had been called the USS Phoenix. She was present in Pearl Harbour when the Japanese launched their surprise attack on the US fleet in December 1941. The attack forced the USA into the Second World War, and the Phoenix went on to perform dedicated service in the Pacific during the conflict.

However, on May 2nd 1982 the Belgrano presented a real threat to the British Task Force. She carried deadly Exocet missiles, which could have been fired at British ships at any time. Concerned that she was about to mount a pincer attack on the British fleet, The Royal Navy requested permission to sink the Belgrano, and Mrs Thatcher gave it. The British submarine Conqueror fired torpedoes at the ship and she sank into the freeing South Atlantic sea very quickly, with the loss of 323 lives.

The British Government’s decision to sink the Belgrano was very controversial because she was outside the 200-mile exclusion zone that Britain had originally imposed around the Falkland Islands. Some people claimed that she was returning to port when she was attacked, and the sinking provoked international condemnation. However, in 2005 Admiral Enrique Molina Pico, former head of the Argentine Navy confirmed that the Belgrano was on a tactical mission to attack to the British fleet and had been ordered to rendezvous with other warships inside the exclusion zone when she was sunk. As the Royal Navy had feared, she was about to mount a pincer attack which could have devastated the British fleet.

5: The only British transport helicopter survived a night-time collision with the sea

When the transport ship Atlantic Conveyor was attacked at sea on May 25th her precious cargo of Chinook helicopters was destroyed in the fires that raged across her decks. By chance, one helicopter, Bravo November, was airborne at the time of the attack and was able to land safely on another ship nearby. However, her crew had to keep her operational without spares, tools, lubricants or even an operating manual.

On May 30th, Bravo November was assigned the dangerous mission of transporting heavy artillery guns, crews and ammunition 40 miles behind enemy lines. The load was much heavier than the maximum recommended, and the weather was so poor that her crew had to use night vision goggles.

After unloading their cargo they set off back to the British base, but flew into a snowstorm, which rendered their night vision useless. Travelling blind at about 100 miles an hour with a faulty altimeter that would not tell them how low they were, Bravo November suddenly crashed into the sea.

The impact ripped off the co-pilot door, damaging the fuselage and the radio.

Fortunately, pilot Squadron Leader Dick Langworthy was able to get the engine restarted and successfully raised her up out of the water. However, their troubles still weren’t over. The door that had been lost as they crashed into the sea contained their maps and, even more importantly, the critical radio codes that identified Bravo November as a British aircraft. With Argentine Chinook helicopters operating on the islands, this was a very serious problem that put them at serious risk of being shot down by their own side.

Unable to contact the port at San Carlos by radio to let them know what had happened, Langworthy turned on all of the lights, hoping that the people on the ground would realise that they were not an enemy aircraft on a bombing mission. Fortunately, even though their radio was broken and couldn’t receive incoming messages, it was still transmitting and their messages were received at the base. Bravo November was able to land safely and she was quickly patched up ready for her next mission.

Bravo November’s role in the land operation was incalculable. Over two weeks, she successfully transported 1,500 troops, 95 casualties, 650 Prisoners of War and 550 tons of cargo.