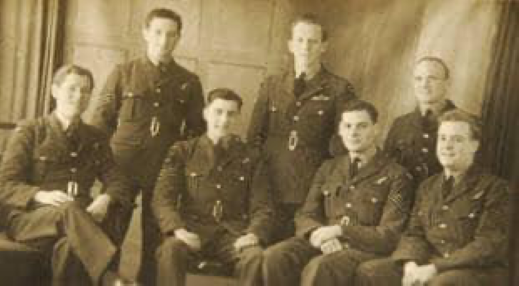 My Dad, F/S John Davies Jones 573430 left his POW diary when he passed away 3 years ago for us to read. He had not shared it prior to his death.

‘ I heard the beginning of machine gun fire and Spaggy, rear gunner, yelled something about corkscrew. This was the last thing I heard over the intercom, for as I later discovered my intercom had been shot away.
Meanwhile the kite was full of smoke and my bomb aimers compartment was very bad, I could hardly breathe, there were flames licking out of the bomb bay and I yelled over the intercom to tell the skipper, it was then I realised my intercom was dead.
I opened up the inspection door to the bomb bay and saw flames licking around and going like hell.  I staggered up the steps and to the skipper and yelled to him to open the bomb doors, then rushed back to the bomb compartment and jettisoned all our bombs. The smoke had died down a bit and I grabbed an extinguisher and tried to put out the fire in the bomb bay. The next I knew Barry came down the steps with his chute on and yelled ‘bail out’. I started looking for my chute, it was up ahead right in the nose. I went up to grab it and then we both opened the escape hatch.
I still had to put on my chute, so I told Barry to go and George was right behind him. I fixed on my chute and jumped. When I left the kite, I had my hand on the carry handle and it was several seconds before I realised and then I grabbed the release handle and yanked. I was prepared for a big tug, but it was not as great as I had thought and instead of a rushing of air, I found myself suspended and swinging gracefully. Then the search lights were on me. I felt very alone with the search lights on me, I was expecting flak to come up at me or for a fighter to come down and shoot me. I realised I must be nearing the ground though descending it was not apparent. There was a hell of a bump and I hit the deck. It was almost totally unexpected, and I must have let out quite a yell on impact.
I released myself, looked around for others but saw none. I saw the kite burning and then heard the ammunition exploding quite away away. I buried my chute and Mae West, got rid of my stripes, boot tops and started walking….