A remembrance to my father 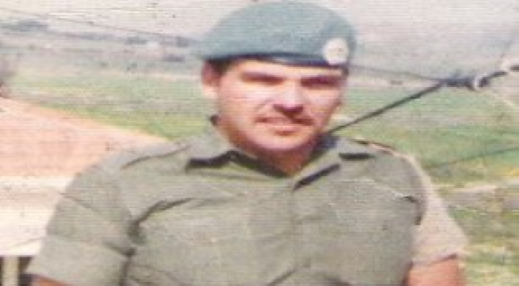 A remembrance to my father Gdsm Gareth Griffiths of the 1st Battalion Welsh Guards affectionately known to his WG muckers as Griff22 or Biffo.

Gareth was born in Llandeilo, Carmarthenshire in 1951 and joined the Corp of Drums and went on to serve in Northern Ireland & then Munster West Germany.

Whilst stationed in Munster he had a pen pal friend, Janice from Cardiff, whom he married in 1972. Their son John was born in 1973 and by this time Gareth had joined the 1st Battalion in Caterham, Surrey. After various tours away to Cyprus & West Germany Gareth and the family returned with the Battalion to Pirbright, Surrey in 1980.

Gareth & Janice’s Son Gary was born in 1980 the same day Gareth returned from his 3rd tour of Northern Ireland and subsequently early in 1982 Gareth returned to Battalion and the MT platoon in Pirbright whilst the battalion were training for the Falklands in which Gareth was due to stay behind but due to a shortage of lorry drivers etc Gareth flew to the Ascension Islands to meet up with the QE2 and then onto the Falkland Islands.

Sadly, on the 8th June 1982 Gareth aged 31 was posted as ‘Missing presumed dead’ following the fateful air strike on the RFA Sir Galahad at Bluff Cove.

Gareth was both a very special Father to John & Gary and husband to Janice and to this day Gareth is missed so much by them and the whole family, his lovely cheeky smile to his soft West Wales voice, Gareth would help anyone out and played the lovable rogue that so many of his WG chums still remember him for and tell the stories of which there were many.

Gary married Jane and have a lovely daughter called Myah Liberty who’s now 8yrs old (named after Liberty lodge in Stanley, FI) and John married Dawn who have a 4yr old boy they named Gareth after his Grandad Griff. Janice remarried and still lives in Ross on Wye as do John & Gary and their families. We would have loved Gareth to have met his grandchildren I know deep down he would have loved them both very much. RIP Dad, love you and always miss you.

Above all Gareth was a very proud Welsh Guard & a rugby loving Welsh man! Cymru Am Byth

‘We will remember them’