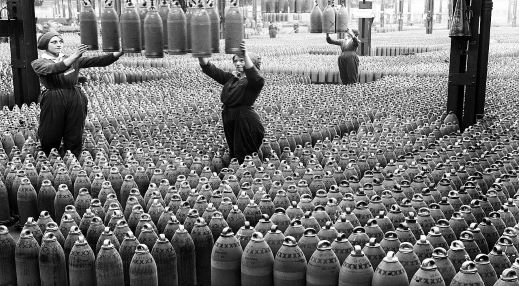 By 1915 women were answering the cries of help from the Government for women to join the war effort. These women may not have been fighting in the trenches but that didn’t mean that they were safe at home and some jobs that women took up were actually riddled with dangers.

Munitions factories made a perfect target for enemy bombing. Consequently, with every shell that passed through women’s hands the risk of amputation was imminent. The nature of attaching a detonator at the top of a shell saw women ‘tapping’ the explosive device, a tap too hard would cause the explosion. The danger was so imminent that women were banned from wearing any silk or nylon clothing in the fear that a rogue spark would set the whole factory alight.

The Canary Girls of WWI who were eloquently named after the effects of working with trinitrotoluene (TNT), where their skin a hair turned yellow were one of the unsung heroes of WWI. Munition factories were dangerous in nature but working with TNT not only led to the discolouration of the skin, which would eventually fade, but health complications later in life were the direct consequence of working with TNT. In 1914 it was discovered that working with TNT, a yellow explosive, was poisonous and by 1915 it was recognised that toxic jaundice was caused by working with the substance. If the TNT hadn’t turned the skin yellow then TNT attacking the liver would have.

There were 400 cases of the disease during WWI that led to the eventual death of a quarter of those effected; yet women carried on anyway as it was seen as the doing their part for the war effort.