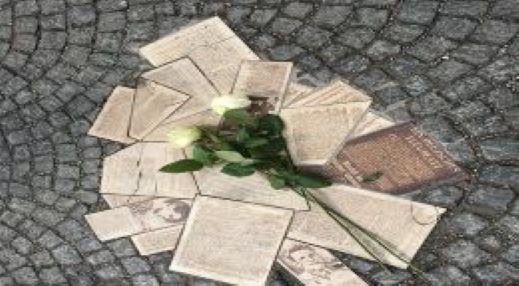 During the darkest days of World War II, it is reassuring to know that not every German succumbed to the relentless Nazi propaganda machine. Most Germans were unaware of the extent of the atrocities committed in their name and very few were bold enough to make their objections public at a time when dissension was viewed as treason.  This is what makes the story of Sophie Scholl and the White Rose all the more inspirational.

On the morning of 18th February 1943, two students, Hans and Sophie Scholl entered Munich University with a suitcase stuffed with copies of a leaflet that they had printed with a few friends.  It was the sixth leaflet they had produced.  Each openly denounced Hitler and the crimes of the Nazi regime, and advocated non-violent passive resistance against what they described as the “dictatorship of evil’. The leaflets were mailed to academics, civil servants, doctors, restaurants and pubs all over Munich, and left in public places where they could be found and read.

Their sixth leaflet proclaimed that “Hitler cannot win the war; he can only prolong it. The guilt of Hitler and his minions goes beyond all measure”.  Appealing to Germans to wake up to the Nazi tyranny, the leaflet called for a new Europe with “freedom of speech, freedom of religion and protection of individual citizens from the arbitrary will of criminal regimes of violence”.

Knowing that the penalties for being caught making and distributing such material would be severe, the siblings wanted to distribute the leaflets quickly.  They left them in corridors and outside classrooms for the students to find when they emerged from their morning lectures.  With her final bundle, 21-year-old Sophie Scholl pushed them over the railings overlooking the atrium and watched them scatter onto the floor below.

It was to prove a fateful moment.  Sophie was spotted by a janitor, Jakob Schmid who stopped them from leaving and alerted the authorities. For this, he later received a substantial reward, a promotion and a standing ovation from hundreds of students at a ceremony held in his honour.  Hans and Sophie were arrested by the Gestapo and taken away to be interrogated. A letter from their friend Christoph Probst found in Hans’ possession implicated him and he was also pulled in for questioning.

Interviewed separately, Sophie initially denied any involvement, claiming that she had seen a stack of leaflets and scattered them into the atrium as a prank. She explained that her suitcase was empty because she was planning a trip to her home in nearby Ulm to collect some laundry. However, when she was told that Hans had confessed, she admitted that they had acted together, and claimed that no one else was involved.  Although neither realised it at the time, they had just four more days to live.

Sophie Scholl was the fourth of six children and grew up in an upper-middle-class home. Her father Robert, a former mayor, was a critic of Hitler from the moment he swept to power, and later spent time in prison after a colleague overheard him describing Hitler as “the scourge of humanity.” He instilled in his children a set of Christian values, the importance of a questioning mind and the value of open and honest dialogue.

As a child, Sophie was a member of the girl’s branch of the Hitler Youth, but became disillusioned when a Jewish friend was denied admittance.  She later began to question how Nazi propaganda was present in practically every subject she learned in school.  After non-political youth groups were banned by the Nazis in 1936 she and Hans were briefly arrested for continuing to support them.  It was her first brush with the law, and it made her more convinced that a regime that demanded unquestioning loyalty and relied on intimidation and threats to enforce its will had to be resisted.

Whilst studying medicine at the University of Munich, Hans became friends with Alexander Schmorell, Christoph Probst and Willi Graf. They attended the lectures of Kurt Huber, a popular philosophy professor who taught that reason and rational independent thought, rather than unthinking obedience, was the basis of good conduct.  The group began to explore ways in which they could oppose Hitler and the Nazi Party without resorting to violence and settled on the idea of making and distributing leaflets.  Since their goal was to instigate passive resistance they selected a peace symbol, the White Rose as their name.

In July 1942, Hans, Alexander and Willi were sent to the Eastern front for three months as medics.  During their time in Poland and the Soviet Union, they witnessed atrocities being committed by the German army, including unarmed Jews being shot.  It was clear to them that Germany was fighting a war it couldn’t win, and that Germans back home weren’t being told the truth about what was happening.  When they returned to Munich, Hans asked Professor Huber to help them organise their campaign of non-violent resistance. Huber initially rejected the idea of leaflets, believing that the danger of producing them outweighed any practical effect they might have. But Hans persuaded him and he agreed to help write them.

Initially, Hans didn’t want to involve his younger sister in their activities, but when Sophie, who was studying biology and philosophy at Munich discovered their plans, she became an active member of the group.  She raised the money to buy a duplicating machine and also helped to distribute the leaflets via a network of contacts throughout Munich.  Their activities soon reached the attention of the authorities, and the Gestapo was ordered to find the culprits and shut down their operation, which they assumed was much larger than it actually was.  They suspected the involvement of students and so had been monitoring the University carefully, and pounced as soon as they received the call from Jakob Schmid. After spending the weekend interrogating Hans, Sophie and Christoph without success, the authorities were keen to make an example of them.  They were accused of treason and appeared in a show trial before the sadistic Nazi judge Roland Freisler on Monday 22nd February.  In court, Sophie defended their actions saying, “Somebody, after all, had to make a start. What we wrote and said is also believed by many others. They just don’t dare express themselves as we did.”

Freisler, acting as both judge and jury sentenced all three to death and they were taken to Stadelheim Prison. There, they were told that their executions would take place later that afternoon. Sophie and Hans were permitted a brief visit from their parents to say goodbye, and Sophie emerged from her meeting wiping away tears. This shocked her Gestapo interrogator, who had not seen her cry before. The prison guards, amazed at their bravery and composure allowed the three students to share a brief moment together before the executioner arrived for them. “Such a fine, sunny day, and I have to go” Sophie is reported to have said as she was taken to the guillotine. “But what does my death matter, if through us thousands of people are awakened and stirred to action?”   Within months, Professor Huber, Alexander Schmorell, and Willi Graf had followed them into the prison execution chamber.

But the story of the White Rose does not end there. A copy of their sixth and final leaflet was smuggled out of Germany and brought to the United Kingdom.  Recognising its value, Prime Minister Winston Churchill ordered millions of copies to be printed, retitled ‘A German Leaflet: Manifesto of the Students of Munich’.  In the summer of 1943, the Royal Air Force dropped them all over Germany, thereby ensuring a far greater readership than the members of the White Rose could ever have dreamed of.

Today, the small group of friends who stood up to Hitler with their eloquent words are revered in Germany.   Schools, streets and memorials have all been constructed in their honour, and a nationwide poll to select the 100 Greatest Germans of all time placed Hans and Sophie Scholl in joint fourth place. Arguably one of the most poignant memorials can be found in Munich University, where replicas of their leaflets have been permanently placed in the ground close to where they fell seventy-seven years ago.