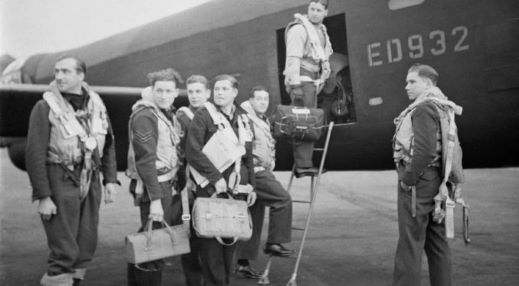 On the evening of 16-17th May 1943, 133 men flying in 19 heavily modified Lancaster bombers took off from RAF Scampton in Lincolnshire and flew deep into the heart of Nazi Germany. Each plane had a crew of seven, a pilot, flight engineer, bomb aimer, rear gunner, front gunner, navigator and wireless operator. Their mission, codenamed Operation Chastise, was to destroy dams in the Ruhr region in order to flood Hitler’s industrial heartland where the Nazi’s manufactured tanks, ammunition and aircraft.

The audacious operation was led by 24-year-old Wing Commander Guy Gibson, a veteran of more than 170 bombing and night-fighter missions. The son of a civil servant, he was born in India in 1918 and educated at Oxford. He wanted to fly from a very early age but his first application to the RAF failed on medical grounds, possibly due to his height. Undeterred, he tried again and he was accepted in August 1936, with a note in his file stating “satisfactory leg length test carried out”.

Gibson quickly acquired a reputation as a daring and exceptionally gifted pilot. When the Second World War began he was a bomber pilot with 83 Squadron. In July 1940 he was awarded the Distinguished Flying Cross (DFC), and after completing his first tour of duty he volunteered to be posted to 29 Squadron to avoid the normal six-month rest from operations. In November 1940 he married his sweetheart Eve Moore in Penarth, South Wales where her family lived. They had met in Coventry, where she was performing as a dancer and actress, and he had pursued her by volunteering to fly planes to RAF St Athan, which was conveniently located close to her home town.

In April 1942, at the age of 23, Gibson was promoted to the rank of Wing Commander and tasked with leading 106 Squadron RAF Bomber Command. After flying 172 dangerous missions into enemy territory, in November 1942 he was awarded the Distinguished Service Order (DSO). Three months later, he was asked to command the RAF’s new 617 Squadron and tasked with putting together a crew for an exceptionally difficult and top-secret mission. He hand-picked airmen from Britain, Australia, Canada, New Zealand and the United States.

The Lancasters were modified to carry one revolutionary four-tonne bomb. Designed by Barnes Wallis (1887-1979) if dropped from a height of exactly 60 feet at precisely the right distance from a dam, the barrel-shaped explosive depth charge would bounce along the water like a stone skimming across a pond before rolling down the dam’s wall and exploding at its base. By bouncing to its target, the bomb would avoid the nets and obstacles designed to prevent conventional bombs from breaching them. The aircrews used dual spotlights with beams that converged vertically at 60 feet to determine the precise height required to launch the bombs successfully.

The pilots who flew through the night to their targets had to fly at just 100 feet (30 meters) above the ground. During the attack on the Mohne Dam, one plane was hit by flak as it dropped its bomb, and crashed in a ball of flame just seconds later. Gibson bravely accompanied the remaining planes as they made their bombing runs in order to draw enemy fire away from them. Ultimately, they successfully breached two of their three targets that night, the Mohne and the Eder dams, causing catastrophic flooding in the region. The Sorpe dam was also hit, but not breached. Every bridge for 30 miles below the breached Mohne dam was destroyed, and twelve military factories were destroyed, with a hundred more damaged.

Operation Chastise was arguably the most daring and dangerous undertaking of the Second World War, and 40% of the squadron was lost during the mission. Three planes turned back after encountering problems on the way to their targets. Five planes were destroyed as they were travelling to the dams. One was destroyed during the attack, and three more were destroyed on the journey home. Eleven of the nineteen bombers made it to their targets, and of these eight returned home safely. Fifty-three airmen were killed and three more were captured after bailing out from planes that crashed.

Albert Speer, the German armaments minister admitted that the breaching of the dams was “a disaster for us for a number of months” and Hitler was forced to recall thousands of workers constructing his Atlantic Wall, a massive network of fortified concrete bunkers defending nearly 2,000 miles of coastline from Norway to Spain. The wall was intended to repel a seaborne Allied invasion of western Europe but the work was severely hampered by the fact that so many workers were sent to the Ruhr to repair building, factories and the dams themselves.

After the mission, Gibson went to Penarth to see his wife and was informed there that he would be receiving the Victoria Cross, the highest award for bravery in war. The exhausted airman, still reeling from the loss of so many men that he had personally selected for the mission is reported to have said, “It all seems so unfair”. His VC made him the most highly decorated serviceman in Britain.

Despite the heavy loss of life, the successful Dambusters raids provided a huge propaganda boost for the Allies. Ten days later, the King and Queen visited RAF Scampton, where Gibson showed the King models and photographs of the dams. The following month, he received his Victoria Cross from the Queen at Buckingham Palace and dined with Prime Minister Winston Churchill at Chequers. In August, he accompanied the Prime Minister on a morale-boosting tour of Canada and the United States, where he met the Canadian Prime Minister, Mackenzie King and President Roosevelt. At a time when American airmen completed their tour of duty and returned home after 25 operations, Gibson was asked at a Press Conference in New York how many operations he had personally flown over Germany. He replied “One hundred and seventy-four” and there was a stunned silence.

On his return to Britain, Gibson was determined to take to the skies again but was ordered instead to write a book about his experiences. He was also selected by the Conservative Party to be their parliamentary candidate for Macclesfield, but he declined their invitation explaining that he wanted to resume his flying career as soon as possible. The book, which he titled ‘Enemy Coast Ahead’ was completed in August 1944 and he appealed to the Marshall of the Royal Air Force, Sir Arthur Harris to let him return to active duty.  His request was granted.

On the evening of 19th September 1944, Gibson and his navigator Squadron Leader James Warwick were returning home from a mission on Rheydt, Germany when their damaged Mosquito aircraft crashed at Steenbergen in the Netherlands. Both men were killed. Fearing that the news would have a devastating impact on morale, Gibson’s death wasn’t officially announced until January 1945. Churchill paid a deeply personal tribute to the 26-year-old war hero in a letter to Eve Gibson;

“I had great admiration for him – the glorious Dambuster. I had hoped that he would come into Parliament and make his way there after the stress of the war was over, but he never spared himself nor would allow others to spare him. We have lost in this officer one of the most splendid of all our fighting men. His name will not be forgotten; it will forever be enshrined in the most wonderful records of our country.”

Gibson’s book was published posthumously, and included an introduction by Sir Arthur Harris, who described Gibson as “As great a warrior as this island ever bred”.