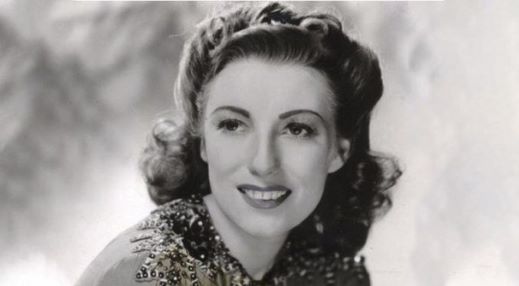 Eighty years ago this country faced a dark and uncertain future. As Great Britain stood largely alone against the forces of tyranny and oppression sweeping across the globe, one calm voice of comfort and hope rang out.  Vera Lynn had been performing since the age of seven and had released her first solo record in 1936 aged 19. Three years later, in 1939, she released the song that would become an anthem of hope for those who had been separated from their loved ones by the conflict.  ‘We’ll Meet Again’ with its promise of a welcome reunion some sunny day perfectly captured the hopes of the nation and propelled Vera Lynn to stardom.

Her songs during the Second World War struck a chord with the troops fighting overseas who were missing home.  When the Daily Express asked British servicemen to name their favourite musical performers: Vera Lynn came out on top and as a result, she became known as “the Forces’ Sweetheart”. No one can listen to songs like “We’ll Meet Again”, “The White Cliffs of Dover” or “A Nightingale Sang in Berkeley Square” and not be transported back in time to those difficult wartime days of bombs, rubble, sirens and blackouts. Even for people like me, who were not born until decades later, the music of Vera Lynn still as the power to perfectly evoke the mood of the era and recapture the emotions of those who heard her all those years ago

However, simply singing era-defining, morale-boosting songs was not enough for Vera Lynn. She wanted to do more to help the war effort.  In 1941 she became a radio personality, with her own show appropriately titled ‘Sincerely Yours’. It went out on the BBC World Service every Sunday night for the duration of the war and became hugely popular with soldiers overseas, who sent in up to 2,000 requests every week.

In addition to singing their requests, Vera Lynn also used her show as a platform to broadcast personal messages to the troops from their families back home. She visited hospitals to interview new mothers and transmitted their messages to men waiting anxiously for news. By doing so, she became a vital connection between the men on the front line and the home they had left behind.

It is hard to imagine now, but this was a groundbreaking and innovative use of radio, and it was not without its critics. Some senior executives at the BBC believed that soldiers receiving personal messages from their loved ones would demoralize them and make them feel homesick.  In reality, of course, the broadcasts had the opposite effect. They inspired and motivated the troops.  As Dame Vera herself would later explain; “I reminded them of their sisters, their sweethearts and their wives they had left behind, and what they were fighting for.”

She wasn’t content to remain simply a voice on the radio either. She starred in three morale-boosting movies, ‘We’ll Meet Again’ (1943), ‘Rhythm Serenade’ (1943) and ‘One Exciting Night’ (1944).  She also courageously took her music directly to the front line, travelling many thousands of miles at great personal risk to entertain the troops with large outdoor concerts in Egypt, India and Japanese-occupied Burma.  No one from the entertainment industry before or since has ever undertaken such a dangerous tour, which lasted for several months.

She was warned not to travel to certain war zones.  But she went anyway, right to the front line, and even into enemy-held territory.  She received a rapturous welcome wherever she went.  The soldiers fighting in the jungles of Burma were so far from home and isolated that they became known as ‘The Forgotten Army’. But Vera Lynn found them all the same, and they never forgot her.

I had a Great Uncle who was one of the Forgotten Army, and when the war ended he came home and told his family one of his most memorable experiences of the war.  He had been on foot moving slowly through the dangerous jungle terrain watching out for enemy patrols when he heard one of Vera Lynn’s songs coming from a loudspeaker in one of the allied camps.  Assuming that someone in the camp was playing her records, he was astonished to discover that the Forces Sweetheart was actually there in person, standing on the back of a truck and singing live.  He never forgot the impact that she made on the morale of every man in the camp that day.

The men who witnessed these astonishing concerts was amazed that one of the biggest names in show business had personally travelled thousands of miles across war zones to the other side of the world simply to entertain them.  Vera Lynn raised their spirits, gave them something to celebrate, and reminded them of what they were fighting to protect.  She later recalled one young man saying to her, “Home can’t be that far away, ’cause you’re here.”

Her popularity as an international entertainer and her work as a dedicated charity campaigner continues to the present day.  Today, her music still rings out in schools all over the country, where it is used to teach a whole new generation. Ten years ago, when my daughter was nine years old she took part in a school play called “We’ll Meet Again” with her classmates about the Second World War. The play featured songs from the era, and the finale was, of course, the song that gave the play its title.

All the proud parents watching the performance in the school hall in a small village in South Wales that evening needed no encouragement to join with our children in singing along to the memorable tune and its timeless words.  Once again, the music of Dame Vera Lynn was doing what it has always done best, bringing families together, connecting generations and reminding us all of what it means to be British.

Dame Vera Lynn truly is the Voice of the Nation.