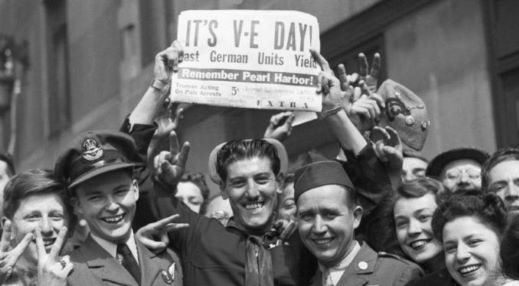 The war against Nazi Germany officially ended one week after Adolf Hitler had committed suicide.  After several hours of tense negotiations, the surrender document was signed by General Alfred Jodl in the French city of Reims. Supreme Allied Commander General Dwight Eisenhower communicated the news in a short telegram, “The mission of this Allied Force was fulfilled at 0241, local time, May 7, 1945”.

However, the Russian leader Stalin was not pleased that the surrender had been negotiated in France.  Russian troops had seized Berlin, and he wanted the signing ceremony to take place there. As a result, the press were told to withhold news of the surrender for 36 hours to give Stalin time to arrange a second signing ceremony in the German capital. The plan was for US President Harry Truman, British Prime Minister Winston Churchill, and French General Charles de Gaulle to each broadcast simultaneous victory messages in their respective countries afterwards.

Although the war against Japan in the Pacific would continue for four more months, the news was welcomed with relief, excitement and jubilation throughout the world. It was announced that Victory in Europe would be officially celebrated the following day, on May 8th and people scrambled to hang bunting, banners and flags in preparation for the celebrations that would follow.

People buying their morning newspapers on 8th May 1945 would have noticed that, in addition to the headlines proclaiming Victory, they carried a feature that had been absent for nearly six years – a weather forecast!. The Daily Mirror predicted, “Wind refreshing; warm and sunny at first but rain can be expected later.” But not even the threat of an imminent downpour could dampen the enthusiasm for the celebrations that would follow.

As crowds began to gather outside Buckingham Palace, services of thanksgiving were held in churches all over the country.  They provided a welcome opportunity, amidst the celebrations, for those who had lost loved ones in the conflict to pause and reflect on the human cost of the war.  These services would continue throughout the day all over Britain.

In the rush to buy flags to wave during the celebrations, many shops sold out and the prices for the few remaining flags available soared.  One retired guardsman reported that he was charged six shillings for a Union flag the size of a handkerchief!

After having lunch at Buckingham Palace with the King and Queen, Churchill addressed the nation and Empire on the radio. His message was broadcast on loudspeakers to the people crowding onto the streets of Central London. “We may allow ourselves a brief period of rejoicing,” he told them, “but let us not forget for a moment the toil and efforts that lie ahead. Japan, with all her treachery and greed, remains unsubdued.”

At 3.00 pm, the King and Queen stepped out onto the balcony of Buckingham Palace for what would be the first of eight appearances that day.  They were accompanied by their daughters, Princesses Elizabeth and Margaret.  As a member of the Auxiliary Territorial Service, Princess Elizabeth wore her khaki ATS uniform.   The people who had been waiting for hours to see them threw their hats into the air and cheered them as they waved.

Churchill was driven to Parliament through the gridlocked streets to deliver the speech he had given on the radio to a cheering House of Commons.  Afterwards, with his voice breaking from emotion, he invited MP’s from all parties to accompany him across the road to Saint Margaret’s Church for a service of thanksgiving to “give humble and reverent thanks to Almighty God for our deliverance from the threat of the German domination”.

After the service, Churchill returned to Buckingham Palace with his War Cabinet for a reception with the King, who invited the Prime Minister to accompany the royal family on their third appearance on the balcony to greet the cheering crowds below. Churchill did so and gave his famous “V for Victory” two-fingered salute, much to their delight. Meanwhile, the 50,000 people who had thronged outside Whitehall in anticipation of seeing the Prime Minister make a scheduled appearance on the balcony there at 5.00 pm occupied their time by cheerfully chanting “We want Winston” and “Five, six, seven, eight. Mr Churchill’s always late!”  He arrived an hour late, not that anyone seemed to mind, and they cheered and applauded him as he told them;

“This is your victory! It is the victory of the cause of freedom in every land. In all our long history we have never seen a greater day than this. Everyone, man or woman, has done their best. Everyone has tried. Neither the long years, nor the dangers, nor the fierce attacks of the enemy, have in any way weakened the independent resolve of the British nation. God bless you all.”

As evening dawned, the parties and celebrations continued all over Britain. Strangers danced and sang together in streets and parks, caught up in the joy of the moment.  Alcohol flowed so freely that in Edinburgh it was reported that the pubs were running out of beer.  London landmarks which withstood the bombs that had rained down on them during the blitz were now proudly illuminated in floodlights for the first time in years.

At 9.00 pm, the celebrations paused for people to listen to a live radio address by the King, which was broadcast throughout the Empire.  The beloved monarch invited his listeners to “remember those who will not come back: their constancy and courage in battle, their sacrifice and endurance” and asked them to “salute in proud gratitude the great host of the living who have brought us to victory”.

During the evening the princesses were given the rare opportunity to go outside and join the celebrations in the London streets. They mingled unrecognised in the crowds and joined in with the singing and dancing.  Princess Elizabeth, still wearing her ATS uniform, pulled her cap down so that people wouldn’t recognise her, and she and her sister joined the crowds in the Mall shouting for the King and Queen to make another appearance.  After making their way to the palace gates, she sent a message inside via one of her royal protection officers, “Please could Mummy and Daddy come out on the balcony?”   They did and the two princesses cheered them with everyone else, before going inside to join them on the balcony once again.

VE Day was celebrated across the world. Huge crowds poured onto the streets of Paris and New York, and a BBC correspondent in Moscow reported that the fireworks over the Kremlin (after Stalin had arranged for Nazi Germany to surrender for a second time) were “the most spectacular I have ever seen”.