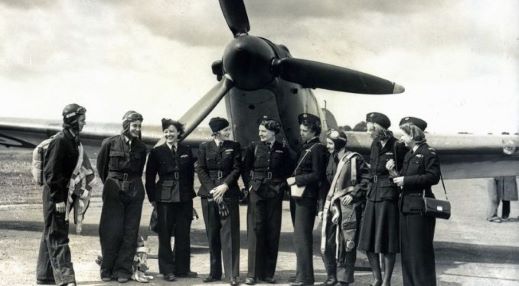 When the Second World War began in September 1939, the civilian Air Transport Auxiliary (ATA) was formed initially to transport mail and essential supplies. However, ATA ferry pilots were soon required to transport new and repaired aircraft from the factories to the airfields where they would be flown in combat missions.  Similarly, the ATA would fly damaged aircraft to the factories for repair.  Between September 1939 and November 1945 the ATA transported 130 different types of aircraft, making 309,011 missions.

The ATA employed over 1,200 skilled pilots from 28 countries.  Women were not permitted to fly in combat operations, and there were strong feelings in the Air Ministry that they should not be allowed to fly military aircraft either.  One aircraft magazine even went so far as to declare that, “The menace is the woman who thinks that she ought to be flying a high-speed bomber when she really has not the intelligence to scrub the floor of a hospital properly.”

Despite such resistance, female pilots petitioned Whitehall for the opportunity to use their flying skills to serve the war effort.  As the demand for ferry pilots grew during the Battle of Britain, an experienced pilot, Pauline Gower, was asked to create a female section of the ATA.  She initially recruited eight female pilots who quickly demonstrated that they could fly any military aircraft.

One of the first eight was Joan Hughes, who at seventeen years of age was the youngest female pilot in Great Britain.  As the war continued, the number of female pilots grew to 168, and in a move that was unprecedented at the time, male and female pilots at the ATA performed the same duties and received equal pay.

The work of a ferry pilot was fraught with danger.  To begin with, they were required to fly planes that they had never flown before, including aircraft that had been damaged in combat.  They flew alone, and without radio equipment.  This meant that they were sometimes mistaken for enemy aircraft and shot at.  But by far the most dangerous part of their job was navigating, particularly in bad weather.  The pilots had to rely on their knowledge of the British countryside to get their planes to their destination, and bad weather could take them miles off course.

Even the most highly experienced pilots were vulnerable to bad weather.   Amy Johnson, the first woman to fly solo from London to Australia, joined the ATS in 1940 and was making a scheduled flight on January 5th 1941 when her plane went off course in adverse weather conditions.  She eventually ran out of fuel and her plane came down in the Thames Estuary near Herne Bay.  Several ships in the region saw her parachute into the bitterly cold water and heard her cries for help, and a sea captain dived overboard to try to save her.  He was later pulled from the water unconscious and died in hospital two days later.  Amy Johnson’s body was never recovered.  In total, 173 ATA personnel were killed on duty.

The Spitfire Sisters who piloted spitfires and every other type of military aircraft that defended the skies over Britain are the unsung heroines of World War II.  They did an essential job that many men thought too difficult for them, and answered their detractors with great courage, skill and professionalism.  When the war ended, the ATA was shut down and Lord Beaverbrook paid tribute to the ferry pilots at the closing ceremony, saying; “They were soldiers fighting in a struggle just as completely as if they had been engaged on the battlefront”.