The London Mint Office celebrates 250 years of The First Duke of Wellington at Apsley House. 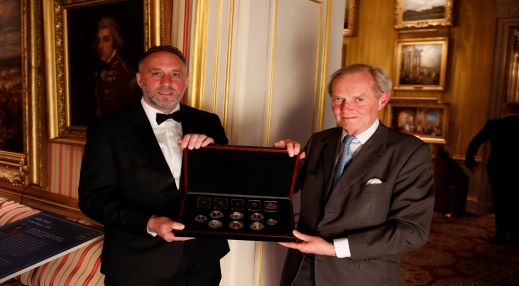 “There can surely be no better place to launch this beautiful new Gold Sovereign set than here in the home that the First Duke of Wellington purchased in 1817. After his victory at the Battle of Waterloo, the Duke was gifted an enormous amount of money by Parliament to build a magnificent Waterloo Palace in London. But instead of building something new, he chose to buy this fashionable townhouse from his older brother Richard, to help him avoid bankruptcy.

I wonder how many of us, if presented with the money to build a lavish palace or help out a sibling, would choose the latter. Apsley House was for many years known simply as “Number 1, London”, which has to be the most prestigious address of all time”.

Justin also went on to explain a very light hearted story of when the Duke became Prime Minister; “Initially, the new Prime Minister refused to move into 10 Downing Street, which he considered a glorified office block and not a home. Instead, he lived in Apsley House and commuted to work every morning. The move from a military to a political career was clearly an adjustment. After chairing his first cabinet meeting in 1828, the new Prime Minister wrote; “An extraordinary affair. I gave them their orders and they wanted to stay and discuss them.”

Managing Director Daniel Penney said “I would personally like to thank his Grace, the current Duke of Wellington for welcoming us to Apsley House and for his ongoing support in helping us to keep the memory and the legacy of the first Duke alive in commemorative coins and medals”.