When Scott met Simon: Reflecting on 35 years since the Falklands Conflict 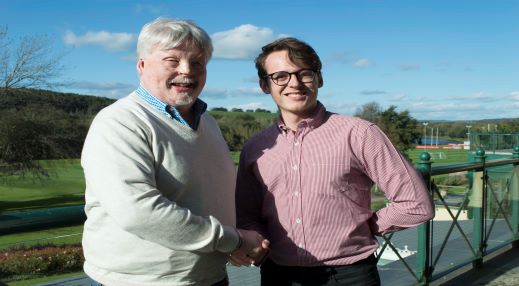 2017 marks a momentous year for British Military history as we commemorate 100 years since the Third Battle of Ypres and also the 35th anniversary of the Falklands Conflict.

As a country, we have an incredibly rich Military history, and it is from these battlefields that we have inspirational stories of great courage from figures such as Douglas Bader, Alan Turing and many others. This year’s 35th anniversary of the Falklands Conflict is a poignant reminder of the servicemen and women who travelled thousands of miles from home shores to fight for the freedom of the Falkland Islanders.

I was very fortunate to have the opportunity to meet Simon Weston CBE, the iconic Falklands veteran who served on the RFA Sir Galahad that was bombed by the Argentine Skyhawk fighters in Bluff Cove. The RFA Sir Galahad had many of the Welsh guards on-board during the attack, 22 of Simon’s platoon which sadly lost their lives and left Simon with severe injuries including third degree burns to 46% of his body.

Since the conflict, Simon has made a full recovery and gone on to talk about his time in the Falklands as well as carrying out a variety of charity work. During our interview, Simon shared with me his memories and feelings of the Falklands.

Simon explained how he didn’t intend to join the Welsh Guards straight away, instead he originally wanted to join the Royal Regiment of Wales or the Military Police. He thought the Police would be a good plan as he could look at joining the police force on his return after the conflict had ended.

During the bombing of the RFA Galahad Simon suffered 46% burns and was left with a long recovery process. Here he tells me what helped him through:

Since the Falklands Conflict, Simon has been awarded a variety of medals, including the South Atlantic Medal. Having read many thoughts of soldiers on the medals they received, I was curious to know what this meant to Simon.

Since the Falklands Conflict, Simon has conducted extensive charity work for a variety of causes, predominately military related; this and his positive outlook throughout his recovery has meant that Simon is a well-known figure in British Military and an inspiration to many.

I feel very privileged to have met someone who so selflessly fought for the freedom of others. I found my interview with Simon inspirational with a very powerful message of staying positive through dark times. As he said in his interview, his injuries have not stopped him from living a full life and through his work with charities he has been able to give so much back for the future of young people, and I believe that his is a wonderful story that we should all be proud of.