THE THIRD BATTLE OF YPRES: MUD AND MADNESS IN FLANDERS FIELDS 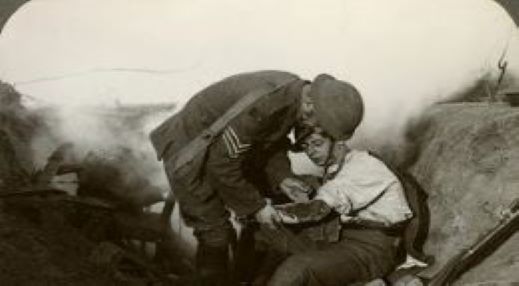 It was mud, mud, everywhere: mud in the trenches, mud in front of the trenches, mud behind the trenches. Every shell-hole was a sea of filthy oozing mud. I suppose there’s a limit to everything, but the mud of Passchendaele … I think it absolutely finished me off.

Tucked close to the coast amid the canals and rivers of Flanders in western Belgium, the town of Ypres was already long acquainted with conflict by the time of the Great War. Over the centuries, this ancient textile town had been besieged, occupied and conquered by various forces seeking to control its strategically vital routes to the sea. But the First World War would bring its own particular brand of destruction, as Ypres became the epicentre of four major battles, the third of which – often called the Battle of Passchendaele – would be remembered not just for the devastating number of casualties, but also for the muddy hell on earth that sapped the men of their strength, health, hope and lives.

The mud made its first appearance at the First Battle of Ypres in October 1914. The British had arrived in the city that month to bolster the Belgian and French defences. They took up positions around Ypres, creating a small salient (bulge) in the trench lines and taking control of the low ridge of higher ground to the south, at Messines. On 20 October the Germans attempted to break through the Allied line on the Yser River and drive through to capture the ports of Dunkirk, Calais and Boulogne. But the attack was thwarted when the Belgians opened the sluice gates and flooded the area with seawater, creating a two-mile wide barrier between themselves and the Germans. The Germans turned instead on Ypres and had soon managed to force the British off the Messines ridge, although they proved unable to capture the city. As winter set in that year, so too did the mud, bringing the fighting around Ypres to an end for the year.

The Germans returned to the attack on Ypres in April the following year. But this time they brought an experimental new weapon – chlorine gas – that would wreak havoc on the Allied troops. On 22 April they released more than 160 tonnes of the gas and watched as the wind carried the yellow-green mist straight into the French-Algerian line. As the Algerians fled, the Germans moved through the gap they had left. Yet, once more, they were prevented from reaching Ypres as a Canadian, British, French and Algerian troops plugged the gap and forced them back. The Allies held firm even when a second gas attack threatened to break the Canadian line and the Germans soon gave up on the Second Battle of Ypres, abandoned their attempt to take the town by force and decided instead to simply bombard it to ruins.

For much of the next two years, both German and Allied attention was taken up by events on other fronts – in Gallipoli, around Verdun and the Somme in France, and along the Eastern front. However, in February 1917, Germany ramped up its submarine attacks on Allied shipping. By April 1917, shipping losses had brought Britain to the brink of ruin. As the Allies scrambled to introduce food rationing and protect their shipping by the introduction of convoys, Admiral Jellicoe warned that if the losses continued, Britain would be unable to continue fighting. Destroying the German submarine bases along the Belgian coast seemed to be the only solution and, as this meant a push through the front at Ypres, the British Expeditionary Force in Flanders prepared itself for a third battle around the beleaguered city.

The BEF’s commander, Field Marshal Haig was delighted, he had long hoped to launch a major offensive in Flanders and could now start making plans to drive the Germans from the vicinity of Ypres. In mid-June, hopes of success were raised when the Royal Engineers blew up the Messines ridge, with an explosion that could be felt in London, and General Herbert Plumer’s men drove the Germans from the ridge. Plumer urged Haig to secure the advantage while the German’s morale was low and press on to capture the Passchendaele ridge to the north of Ypres. But Haig had waited a long time make his move in Flanders and refused to countenance any change to his plan to launch an offensive at the end of July. By then the British had, of course, lost the element of surprise.

The prelude to the offensive was a heavy artillery bombardment. For ten days, the Allies bombarded the Germans, raining over four million shells down on them. The Germans, who had experience this many times before and knew an attack was brewing, spent the time reinforcing their positions and making ready for the offensive. The British attack finally began at 3.50 a.m. on 31 July when the British Fifth Army under General Hubert Gough advanced to the northwest of Ypres towards the Passchendaele ridge. The soldiers managed to advance a couple of miles in the back and forth of fighting that day. But that night rain began to fall, and fall.

The next couple of weeks saw the heaviest rainfall in Flanders for forty years years. It soon filled the craters left in the heavy clay soil by the British bombardment. The bombardment had also destroyed the natural drainage in the area, leaving the streams that criss-crossed the battlefield nowhere to go. The ground between Ypres and Passchendaele swiftly turned into a quagmire of sticky, oozing mud
that sucked men, animals, and machinery into its depths. Over the coming months, the men lived and fought in the most the most horrendous conditions imaginable as one veteran of the campaign, Serjeant-Major Richard Tobin, would later recall:

There was no chance of being wounded and getting a Blighty one at Passchendaele. You could either get through it or die, because if you were wounded and slipped off the duckboards you just sank i
nto the mud … At each side [of the duckboards] was a sea of mud, and if you stumbled you would go in up to the waist, and literally every pool was full of the decomposed bodies of humans and mules.[2]
There was simply no relief from the wet and cold. At the Front, there were no trenches, just a series of posts scraped in the mud, in which the men would stand for hours on end, often up to their waists in water. The only warmth to be found was from the two-gallon petrol tins of tea delivered each day to each soldier, which inevitably cooled quickly and made them sick as they imbibed the petrol residue. Trench foot and trench fever were rife and the strain exerted by the conditions took its toll on the soldiers’ mental health; many were broken by the whole experience, many told of  experiencing powerful premonitions that they would survive a particular day and while some did, perhaps many more realised too late that these premonitions were just the fevered hopes of desperate men.

The rain also brought the offensive to a halt and it wasn’t until 16 August that a small break in the weather allowed a new attempt to gain ground at the Battle of Langemarck. General Plumer’s strategy was to undertake a series of small actions that would inch the British closer to the Passchendaele ridge rather than attempt to make a dramatic break through and successes followed at the battles of the Menin Road Bridge (20 September), Polygon Wood (26 September) and Broodseinde (4 October), which gave the British control of the ridge east of Ypres. Haig, however wanted more. Convinced that the German army was near to collapse, he pushed Plumer to continue the offensive towards the Passchendaele ridge. But he failed to recognise the exhaustion of his own men and as German reinforcements began to arrive form the Eastern front, the Battle of Poelcappelle (9 October) and the First Battle of Passchendaele (12 October) brought little progress. Still on 6 November the Allies finally captured Passchendaele village. It must have been with some relief all round when Haig declared the offensive a success and brought the push to an end.

The Third Battle of Ypres was over. The offensive had succeeded in taken some of the pressure off the French further south but it had failed in its primary objective of capturing Germany’s submarine bases. Lloyd George, the Prime Minister during the battle, would later write in his memoirs: ‘Passchendaele was indeed one of the greatest disasters of the war … No soldier of any intelligence now defends this senseless campaign.’ And senseless it must have seemed to the families of the hundreds of thousands of Allied casualties of the battle: just five months later the German Army recaptured most of the ground gained amid the horrors of Passchendaele’s mud.