One of the most iconic posters of the First World War? 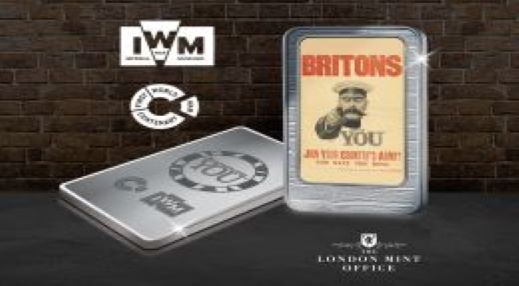 Want to own your very own FREE Official Imperial War Museums Silver Layered Ingot? Simply click the image below to claim yours now!

Calling the country to arms.

The Great War was the first conflict in which Britain produced and relied heavily on propaganda to persuade potential recruits. The expanded propaganda engine was brought under government control with the establishment of the War Propaganda Bureau, under the overall leadership of writer and MP Charles Masterman. The Bureau began its propaganda campaign in September 1914 when Masterman invited many leading British authors to Wellington House to discuss ways of best promoting Britain’s interests during the war.

The posters were deliberately emotive and were displayed in villages and towns in order to persuade able men to sign up to serve their country prior to the passing of the Military Service Act in January 1916. The act specified that single men aged 18 to 40 years old were liable to be called up for military service unless they were widowed with children or ministers of a religion.

In order to commemorate the centenary year of the Armistice, The London Mint Office has partnered up with The Imperial War Museums to release an exclusive ingot collection featuring some of the most famous recruitment posters and the lead ingot in the collection is called ‘Britons, Join Your Country’s Army!’ The lead ingot is silver layered and features perhaps the most famous recruitment poster of the First World War; Field Marshal Lord Kitchener’s ‘Britons, Join Your County’s Army’ which first appeared on 5th September 1914 on the front cover of London Opinion magazine. The poster was never made official but a small print run of posters were privately produced soon after the publication of the magazine.

The designer of the poster is the professional illustrator Alfred Leete and the poster depicts Field Marshall Lord Kitchener pointing an accusatory finger at the viewer who is being directly addressed. Field Marshal Horatio Herbert Kitchener, 1st Earl Kitchener, was a senior British army officer who won notoriety with his success in implementing his scorched earth policy against the Boers in the Second Boer War. When the First World War began, Prime Minister Asquith hastily appointed Kitchener Secretary of State for War.

A career soldier, Kitchener served in Palestine, Egypt, South Africa and India prior to the First World War, eventually becoming Consul General to Egypt in 1911. From the outset of The Great War, against cabinet opinion, Kitchener correctly predicted a long war that would last at least three years, require huge new armies to defeat Germany, and cause huge casualties before the end would come. He soon began overseeing the massive expansion of the British Army.

The Times recorded the scene in London on 3 January 1915; “Posters appealing to recruits are to be seen on every hoarding, in most windows, in omnibuses, tramcars and commercial vans. The great base of Nelson’s Column is covered with them. Their number and variety are remarkable. Everywhere Lord Kitchener sternly points a monstrously big finger, exclaiming ‘I Want You’. The poster’s direct and simple approach has meant that the image was more successful than many of the official recruitment posters of the early part of the war which were generally unsophisticated, with an over-reliance on length sections of text.

The success of the design arguably overshadows Kitchener’s own legacy. Its striking visual appeal has been picked up all over the world. Artists such as James Montgomery Flagg in the USA reproduced the poster with an image of Uncle Sam replacing Kitchener. There were four million copies printed, and still features in recruitment dries in the US today.

Want to own your very own FREE Official Imperial War Museums Silver Layered Ingot? Simply click the image below to claim yours now!