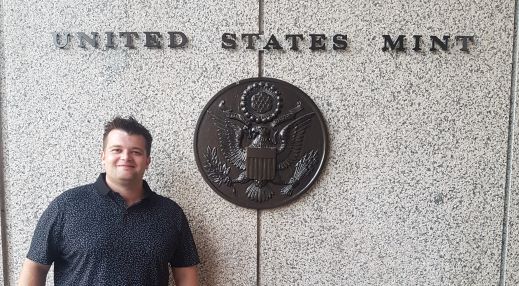 I looked forward to my very first ANA event (American Numismatic Association) with a certain sense of nervousness and a tremendous amount of excitement. The opportunity to travel to a city like Philadelphia is quite rare, but to visit while representing the company of which I have been a member for over 10 years filled me with great pride. The prestige of being selected to represent The London Mint Office on the world stage was not lost on me and this prospect was equally as thrilling as knowing I was getting to see some absolute world class coins.

For those that don’t know, the ANA is split into two distinct sections. Firstly, you have representatives of all the largest mints from around the world meeting to discuss upcoming business. It is a hotbed of creative talent in the numismatic world as each mint or company exhibits their newest releases to share with other markets. Secondly it is a fair for coin lovers to come and see all the amazing coins on show – and what a turn out it was!

The main event, the star attraction and the most thrilling experience I’ve ever had as a numismatist has to be the coin fair itself. The ANA coin fair, which takes place at the Philadelphia Convention Centre, is a huge room filled with hundreds of stalls with coin dealers from all over the world showcasing their amazing coins and other products. This ranges from large mints to private dealers, set out like a numismatic market-place, offering every genre of coin imaginable from Gold Sovereigns, to Islamic Dinars and even ancient silver coins of Julius Caesar.

The convention centre also holds a series of auctions from the world’s largest and most prestigious auction houses which are attended by all forms of collector.  For me this was one of the most exciting elements of the ANA, seeing rare and historic coins being fought over by collectors can be very thrilling, especially when you know just how rare some of the coins were. Having worked in numismatics for 10 years I was like a child in a sweet shop. Only true collectors and numismatists will appreciate the thrill of a live auction, watching some of the world’s most prestigious and famous coins being fought over to be added to people’s collections, one highlight being the most expensive and anticipated piece of the day came about, the Una and the Lion 15 Piece Proof Set.

Without knowing anyone else in the room, I knew the excitement was building when a murmur went around the room as the lot was introduced. A battle ensued between an internet bidder and someone present in the room. Live persistence prevailed and the bidder in the room won the set, at a whopping $360,000 hammer price. The price at the final hammer was met with a rapturous applause, no-one quite believing what we had just witnessed! From a numismatic point of view it was quite the spectacle.

Representatives of the London Mint Office & Samlerhuset Group were invited for a private, after-hours tour of the United States Mint Philadelphia. This was a truly exhilarating experience. It was my first trip to a national mint and it did not disappoint. We were told by our tour guide on arrival that it is in fact the largest mint in the world, producing an incredible 36,000,000 coins over 8 hour shifts, every single day. Such was the serious nature of this prestigious federal mint, we were accompanied by two armed guards, who although exuded an air of authority and seriousness, were just as friendly, accommodating and knowledgeable as our tour guide.

We were lucky enough to visit the art department where original designs were thought up and conceived. A great discussion took place between our representatives and theirs about the aesthetics and the ethos surrounding their design influence; it was very informative and engaging. We were then taken around the building where we saw dies being created using the most up to date, modern and even ground-breaking techniques. Finally we saw coins being struck and separated into their various denominations. The whole experience was incredibly enlightening, giving me a greater appreciation for the role that numismatics plays in modern society.

I think the biggest thing I’ve learned about my experience at the ANA fair is that even though we have entered into the digital age, a time where tangible money seems less and less relevant, coin manufacturing, coin collecting and the passion for coinage in our society is still very much alive and well. There is something about holding a coin in your hand which evokes an emotion. Whether it is a penny that you were given by your grandmother, or a $360,000 proof set won at auction, the history that is attached to each coin is an experience that cannot be expressed in the digital world. No matter what your age, station, nationality or personality, coin collecting is something we all can share. That is what the passion is and that is why we do it.