The London Mint Office Honours The Dambusters at Welsh Museum 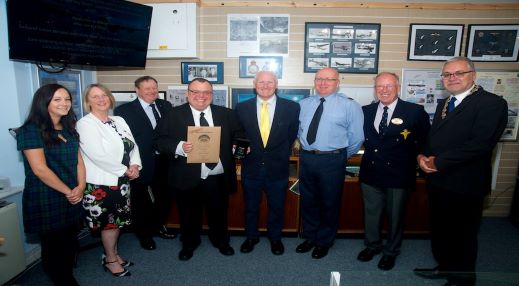 The London Mint Office prides itself on putting history into the hands of our customers, and that’s exactly what we did on Saturday 11th of August when our Heritage Ambassador Justin Robinson and Product Manager Rhian Pope made a very special presentation to Porthcawl Museum in South Wales.

As part of a Dambuster Commemoration event we presented the museum with a fascinating selection of replica blueprints, photographs, maps, plans, and other documents from the National Archives that once briefed Squadron 617 ahead of their daring ‘Dambusters’ mission over Nazi Germany in May 1943. The night-time raid, codenamed Operation Chastise, is commemorated on a new £1 coin issued to mark the 75th Anniversary of the mission, which will also go on display in the museum.

Want to own your very own Operation Chastise Mission Pack and Limited Edition £1 Coin? Click below image to find out more!

Flying at night just 60 feet above the ground in specially modified Lancaster Bombers, 19 brave aircrews successfully deployed an innovative bouncing bomb that had never been used in combat before to breach dams considered impregnable.  The resulting flooding caused catastrophic damage to the Nazi war machine and forced Hitler to redeploy 70,000 men to repair the dams, infrastructure and destroyed factories.  Tragically, eight planes failed to return home, and 53 of the 133 courageous Dambusters were killed in the attacks.

Wales have strong connections to the Dambuster Raids, as 14 of the 19 aircrews included personnel trained either at RAF Stormy Down, near Porthcawl or at RAF Saint Athan in the neighbouring Vale of Glamorgan.  Sergeant Gordon Yeo, from nearby Barry, was the only Welshman to take part.  He was killed when his plane was shot down on its homeward journey after helping to breach the Möhne Dam.  His cousin Belinda Brown joined us at Porthcawl Museum and a piece of twisted metal from his Lancaster bomber, retrieved from the Dutch coast was donated to the museum, where it will have pride of place amongst the exhibits.

The presentation was attended by representatives of the Royal Air Force, Group 617, local dignitaries and was reported on the ITV News later that evening.

Justin Robinson said, “The courage, skill and daring of the Dambusters in undertaking this dangerous mission over Nazi Germany whilst flying just 60 feet above the ground is truly breathtaking. We are very honoured to have been able to play a small part in honouring their memory today.”