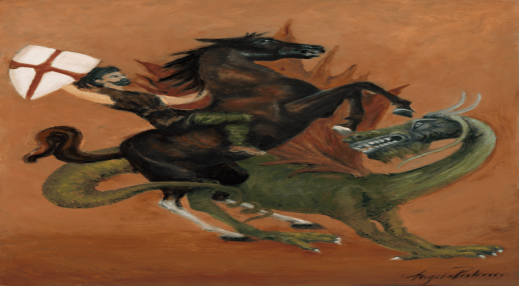 Throughout the middle ages, shrines dedicated to Saint George sprung up across the country with many communities trying to claim him as one of their own.  For example, locals in Uffington in Berkshire argued that the great white horse carved into the hillside marked the very spot where George had slain the dragon.  Perhaps more than any other Saint, the noble Knight and his reptilian adversary looked out of stained glass windows, sculptures and paintings and their epic encounter was preached from pulpits every year on the Sunday preceding his feast day.

Throughout the late fourteenth and fifteenth centuries processions or ‘ridings’ were held across the country in which large model dragons were pursued by men on horseback dressed as Saint George.   The earliest recorded parade was held in Norwich in 1420, but other examples are recorded in Leicester, Coventry, Stratford, Chester and York.

These processions eventually evolved into popular morality plays.  The town of Lydd in Kent performed a Saint George play in 1456 and in July 1511, twenty-eight parishes in Cambridge pooled their resources to put on an elaborate show that included a pageant dragon, minstrels and actors.   The tradition of towns performing plays about Saint George continued throughout the centuries to the Victorian era.

However, recent years have not been kind to the noble Knight.  As scholars continue to question his place in history, a BBC poll has suggested that Saint Alban should replace him as England’s patron saint.   Alban, who lived in England, became Britain’s first Christian martyr in the third century for sheltering a Christian priest and refusing to acknowledge the divinity of the emperor.

Nonetheless, Saint George continues to attract strong support.  Stephen Garnett, editor of the magazine “This England” has famously described his enduring appeal as “standing for everything that makes this country great – freedom of expression, helping those less fortunate, tolerance of other people’s beliefs, kindness and standing up for what you believe to be right”

In 1526, the gold Noble issued during the reign of King Henry VIII (1509-47) became the first English coin to depict Saint George’s epic battle with the dragon.   But it was the masterwork created by Italian sculptor and engraver Benedetto Pistrucci in 1817 for the modern sovereign that has become an enduring classic.

To honour the 200th anniversary of this iconic design, The London Mint Office turned to the renowned Canadian artist Angela Pistrucci to create a fitting tribute to her great-great-great-great uncle’s design.  The result, which appeared on the 2017 Gibraltar Sovereign was so successful that Angela has now gone on to complete an ambitious project for 2018 that tells the complete story of the legend in coins for the first time in history.

The new series of seven beautifully detailed legal-tender coins describe the events leading up to and the aftermath of the most famous fight in numismatic history, and will help to ensure that the legend of Saint George, though shrouded in myth and superstition, will continue to endure for many years to come.

The Legend of St George