Out with the old, in with the new don't get caught out 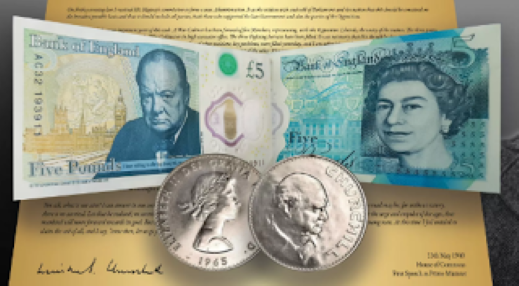 Time is running out

With the introduction of the new £5 note a time limit has been enforced to ensure old notes are removed from circulation, you will only have until the 5th of May to spend your old note in shops; after this it will cease to be legal tender and you will only be able to take them to your banks to redeem.

We have seen a variety of wonderful designs on the British £5 note in the last 200 years or so, but they have come a long way since the original back in 1793, known as the white £5 note – it was much bigger than the notes we know today, in fact it was nearly twice the size! However it was felt that this note was vulnerable to counterfeiting, so 164 years later in 1957 a new double sided multi coloured bank note was printed and considered ‘revolutionary’ for it was the first note to include a watermark image.

Since this time Britain has seen several more designs including the ‘Portrait Series’ in 1963 where, for the first time, a Monarch was printed on a note – Her Majesty Queen Elizabeth II . But with notes still vulnerable to counterfeiting the Bank of England decided to introduce a completely new Polymer £5 note that would turn this problem around, with a variety of new security features to make counterfeiting practically impossible.

The Future of Notes

The newly secure £5 note entered circulation on September 13th 2016.  Depicting  Sir Winston Churchill alongside one of his most famous quotes “I have nothing to offer but blood, toil, tears and sweat”- one of the most iconic quotes made during the Second World War – as the man who led Britain through the Second World War it is considered a great tribute. However this is not Churchill’s first time on British currency, Churchill was in fact the first commoner to appear on a coin in 1965 when a special Churchill Crown was struck in honour of the man who kept the spirit of Britain high during a very brutal war. Find out more about this here