From concept to creation -the battle of Hastings anniversary medal 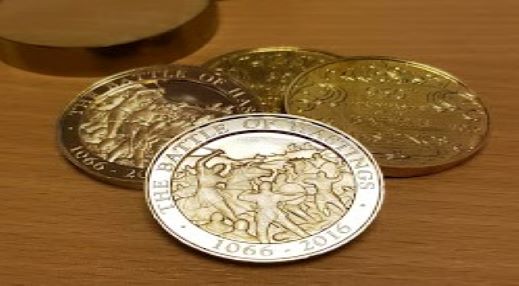 The Battle of Hastings Medal, commemorating the momentous anniversary – 14thOctober 2016 – 950 years since 1066.  This was arguably the year Britain changed forever.

A year of three kings, 1066 ended with the coronation of William the Conqueror, on Christmas Day.  William’s successes are immortalized in history, and the world-famous Bayeux Tapestry.  His accession sparked a lineage which stretches to Queen Elizabeth II.

The death of King Edward the Confessor triggered a free-for-all for the title of King of England.  Harold, son of Godwin, Earl of Wessex, was one of the most powerful Saxon noblemen in Britain, and seized power upon Edward’s death.  Harald Hardrada was a vicious Viking ruler, who saw the death of Edward as the perfect opportunity to invade.  Finally, William, Duke of Normandy was furiously preparing an invasion fleet, having apparently been promised the English throne by Edward before he died.

Edward the Confessor’s death sparked the power struggles of 1066.
(Part of the Hastings 950 medal set highlighting key stages of the Battle)

Hardrada, the Viking King, was the first to invade.  He fought his way into the North of England and met with the newly crowned King Harold at Stamford Bridge (a few miles east of York).  Evenly matched, Harold’s army defeated the Vikings – Hardrada dying from an arrow to the neck.  But his army took heavy losses and to Harold’s horror, William had taken the opportunity to invade.  Harold was forced to march over 250 miles from York to Pevensey, on the south coast – a feat which he apparently accomplished in only one week!

Harald Hardrada wanted England as a Viking domain, as it had been under his predecessor, King Cnut.
(Part of the Hastings 950 medal set highlighting key stages of the Battle)

Harold’s army met William at Hastings, near the modern-day village of Battle, on the 14thOctober, 1066.  Though his army was exhausted, they held firm against the Norman onslaught of arrows and javelins for hours, before breaking under the strength of William’s well fed and fresh force.  Harold, as we’ve all been taught, took an arrow in the eye and fell.  William of Normandy, now William the Conqueror, simply marched on to London.

“It’s always exciting and gratifying when a newly struck medal arrives at our office – even more so when you’ve been involved in managing the conception, design and execution of the piece.  In this case, it’s the Battle of Hastings Anniversary Medal – and what a design it is.

From the very beginning it was decided to showcase a stunning design in high-relief.  Master sculptor John Bergdahl has gone to amazing lengths to show the battle, inspired by details from the Bayeux Tapestry.  Right down to the saddles, motifs of the shields and the weaponry held by every soldier, his design really brings the Bayeux Tapestry to life”- Dom Chorney (Project Manager).

(Bergdahl’s original pencil sketch of the Battle of Hastings Medal, next too the finish article)

The reverse has been sculpted by Master Sculptor Matt Bonaccorsi, and is also inspired by the Bayeux Tapestry.  With beautiful floral designs lifted straight from the fabric, the design is crested with a pair of griffins, some of the many animals sewn into the Bayeux Tapestry.

William the Conqueror never issued a medallion to commemorate his victory at Hastings. However, 950 years on the Worcestershire Medal Service – Medalist to Her Majesty Queen Elizabeth II and holders of the Royal Warrant struck the medal to honour a key piece of British history.