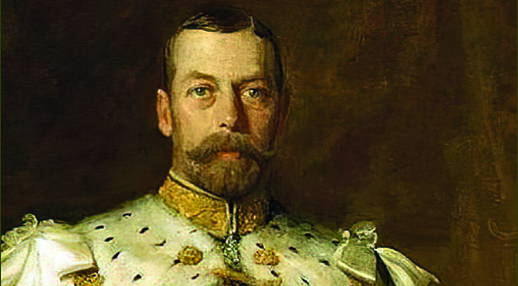 When King George V became King in 1910, the Royal Mint held a design competition to select the artist to create his coin portrait. It was won by an Australian sculptor, Edgar Bertram Mackennal. Although no one could have known it at the time, his depiction of the left-facing bearded monarch would be the last to appear on gold sovereigns and half sovereigns struck for circulation. In fact, after 1915, gold coins were rarely seen in circulation in Britain, and it was even considered unpatriotic and unhelpful to the war effort to own them.

The removal of gold coins from Britain’s circulating coinage marked a significant moment in our history, and this makes the King George V half-sovereign highly sought after by collectors today. The London Mint Office have however managed to secure a limited number of these truly special gold coins, which you can find and own for yourself by visiting our King George V half-sovereign page.

When the First World War began, the British Empire spanned a quarter of the globe, and the gold sovereign was the most important trading coin in the world. However, the Government needed gold to help pay off our war debts to the United States. They appealed for the public to do their patriotic duty and exchange their gold coins at the bank for paper banknotes of the same value.

A morale-boosting poster issued by the Parliamentary War Savings Committee in 1915 displayed an image of the gold coin and proudly declared that 'The British Sovereign Will Win'. It invited people to ask at their nearest post office for details about investing in a war loan.

It can't have been an easy task for people to exchange their precious gold coins for printed pieces of paper. In 2017, a piano tuner in Shropshire discovered 633 sovereigns and 280 half sovereigns that had been carefully concealed under the keyboard of an instrument donated to a community college.  Its original owners, who had purchased the piano in 1983, had no idea they were there. The coins dated from 1847 to 1915, when the gold half sovereign was last struck in London.

History in your Hands

Meanwhile, vast quantities of half sovereigns and sovereigns were shipped across the Atlantic and stored in Fort Knox until the 1930s, when the United States made the ownership of foreign coins illegal. The gold coins were then melted down into bars. Only those that had found their way into the hands of private collectors, hoarders, museums, and foreign bank vaults would have escaped the refinery. This makes King George V half-sovereigns that have survived to the present day against the odds even more collectable.

For King and Country!

Grandfather to our current Queen, King George V, became a beacon of hope for many during the dark days of the First World War (1914-1918), embodying the expression 'For King and Country!'  The patriotic monarch wisely changed his family surname from Saxe-Coburg and Gotha to the more British sounding Windsor to distance himself from his warmongering cousin Kaiser Wilhelm II.

The King further cemented his reputation as a popular monarch by travelling widely throughout Britain and the Empire to bring the royal family closer to the public than ever before. He was also instrumental in setting up the annual Armistice Day to remember those who fell in the conflict and began the tradition of broadcasting a personal message to his subjects every Christmas, a tradition which has endured to the present day.

The London Mint Office has recently secured a limited number of the last gold half-sovereigns to be struck for circulation during this momentous era. They were found in the gold reserves of a major European national bank, where they had been stored for over a century in a high-security vault.

It was once common for central banks to hold their gold reserves in trusted foreign currencies, and British half sovereigns would have been an excellent choice at a time when the British Empire was the world's leading economic and military power.

The bank was in the process of converting its gold coinage into modern bars when the discovery came to light, and we are very pleased to have the opportunity to rescue them from the furnace and bring them home to Britain.

The reign of King George V marked a significant turning point in the history of Britain’s signature coins, sovereigns and half sovereigns. To find out how you can own your very own original strike King George V half-sovereign click here. 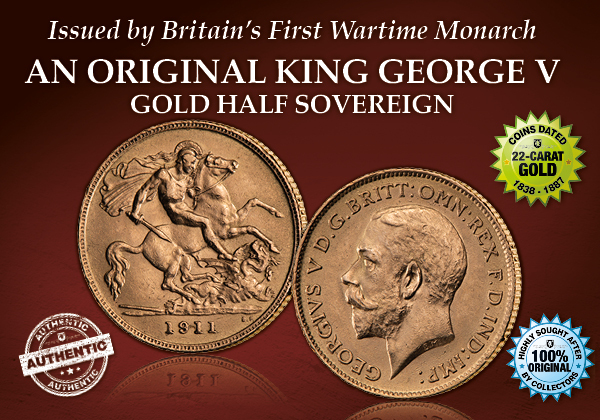