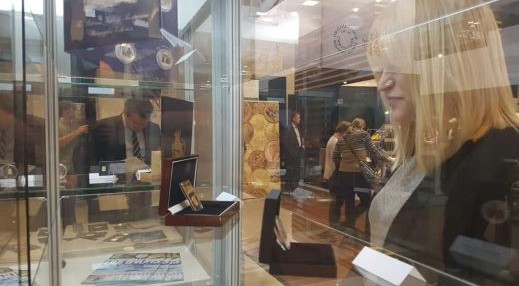 This year, The World Money Fair celebrated its 47th year of bringing collectors, dealers, suppliers and mints together under one roof.  For one packed weekend every year, the people passionate about making and collecting money journey to the Estrel Congress Center in Berlin.  There, Europe’s largest hotel plays host to over 300 international exhibitors from over 50 countries and welcomes over 15,000.  They come to share their new collections, celebrate the experience of collecting, trade with one another and experience the magic of numismatics.

Each year World Money Fair hosts a guest of honour, in 2017 it was the South African Mint who were celebrating 50 years of the Krugerrand. This year, it was the turn of the Royal Dutch Mint to be honoured for their centuries of innovation.

Every year, the Samlerhuset Group, owner of the Mint of Norway and one of the key shareholders of World Money Fair, hosts an exhibitors reception, which is always well attended.   This year CEO Reidar Nilsen took to the stage to talk about the coins, medals and ingots designed and produced throughout Europe by companies within the Group.  Guest speakers at the reception included the Mint Master for Monnaie De Paris Mr Aurélien Rousseau, and the CEO of World Money Fair Jens Heise-Engelschalk.

Another highlight of the World Money Fair is the Media Forum, which is open to all attendees and presents Mints and Central Banks with a platform to launch their new coin and medal programmes.  This year delegates enjoyed presentations from companies including The Royal Canadian Mint, The Bank of Latvia, the German Federal Ministry of Finance, Japan Mint, South African Mint and the Austrian Mint. We were also very excited to see Joseph Bossano MP, Minister for Economic Development and Telecommunications in Gibraltar taking the opportunity to praise the 2017 Angela Pistrucci sovereign and the new Royal Platinum Photographic Collection issued by Gibraltar and available to purchase through The London Mint Office.

For the first time, The London Mint Office displayed a small portfolio of our products at the World Money Fair.  As proud members of the Samlerhuset Group, the exhibition gave us an opportunity to meet coin collectors and enthusiasts from around the world and share our love of history and coins.

(The Royal Platinum Photographic Collection, celebrating the Queen & Prince Phillips 70th Wedding Anniversary. A beautiful collection looking back at some of the key highlights of their marriage- Click Here to Learn More)

Taking pride of place on the Samlerhuset stand was a medal that needs no introduction; The Nobel Peace Prize struck by our sister company The Mint of Norway.  Designed by Gustav Vigeland and featuring the bearded face of Alfred Nobel, the medal is awarded every year to individuals and groups who have made an outstanding effort to promote peace in the world.

Given its importance on the world stage, it is appropriate that the Nobel Peace Prize is struck in ethically sourced Fairmined Gold.  Samlerhuset are leading the numismatic industry in promoting Fairmined, an assurance label that certifies gold from empowered responsible artisanal and small-scale mining organizations who meet world-leading standards for responsible practices.