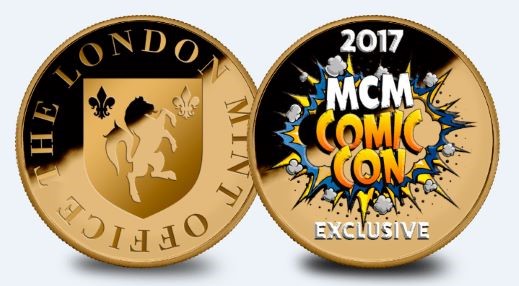 Coins worthy of a super hero

The London Mint Office known for its more traditional coins such as the British Sovereign, Crowns and other wonderful historic coins is now breaking the mould. In the recent months it has started offering new types of coins that would appeal to more than your traditional coin collector.

Celebrating the release of the Doctor Strange Movie

The Doctor Strange movie has hit the UK cinemas and having grossed over £500 million worldwide, this new 2017 Silver coin is proving just as much of a hit with coin collectors on pre-release.

New for 2017 MARVEL has made it possible for fans and collectors to add Doctor Strange to their coin collection with this uniquely dome-shaped silver coin – exclusively available in the UK through The London Mint Office.

The Guardians of the Galaxy Volume 2 Collection

A coin set worthy of The Collector himself, The London Mint Office is proud to present the official Guardians of the Galaxy Vol.2 coin collection, featuring everyone’s favourite band of “like-minded misfits”, that are truly out of this world.

But there is more!..

With the highly popular Marvel coin collection becoming a vital asset to any Marvel fan we are now exhibiting our coin collection to one of the U.K’s largest Comic Book Events, MCM Comic Con at the London Excel this October. There you will be able to see the coins that have taken Marvel fans by storm! And to add to the excitement of the event we will also be unveiling 3 BRAND NEW Marvel coins staring 3 legendary heroes.. with an added twist!

Also for the first time ever!..

The London Mint Office are proud to be partnering with MCM Comic Con to produce the very first MCM ComiCoin! A very limited edition collectable for MCM Comic Con fans! Want to know more about this? Click here to register your interest to be one of the first to get your hands on this ultimate Comic Con Collectable!