LONDON MINT OFFICE EXCLUSIVE: DID A ROMAN COIN INSPIRE THE BRILLIANT DESIGN OF ONE OF THE WORLDS MOST RECOGNISED COINS? 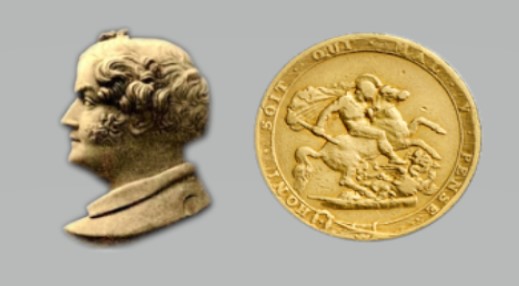 2017 marks the 200th anniversary of Britain’s most famous gold coin, the modern Sovereign.

With only a few exceptions, every UK Sovereign struck since 1817 has featured the same depiction of St George slaying the dragon. This now iconic design was created by Italian sculptor and engraver Benedetto Pistrucci (1783-1855) who went on to became Chief Medallist at The Royal Mint.

Pistrucci recalls in his autobiography that he was introduced to Lord and Lady Spencer by Sir Joseph Banks, the President of the Royal Society. During their meeting, Pistrucci recorded that;

“Her ladyship … showed me a large model in wax of a St. George, done by Marchant, and said to me: ” My husband would like you to make a model in wax, of the same size and subject: but I should like it in the Greek style” as that was the style in which naked figures were done; and the mantle in this beautiful white, would have a superb effect.”

Pistrucci was delighted to accept the commission and produced his first design of Saint George and the Dragon in the ‘Greek style’ as requested.

Later, when considering a suitable design for the proposed new gold Sovereign, Pistrucci suggested that the patron Saint of England would be a fitting subject, and this was met with the approval of William Wellesley Pole, Master of The Royal Mint. In addition to appearing on paintings and statues, the legendary battle had featured on coins before. In the twelfth century, for example, a depiction had appeared on coins issued by Roger of Salerno, Regent of Antioch.

However, there is little evidence that Pistrucci was inspired by these medieval depictions of the famous confrontation between the saint and the dragon. Pistrucci’s passion was for the classical, and it was said that he liked to “study Greek originals day and night”.

It is likely that the artist drew inspiration from the collection of Classical Greek marble sculptures from the Parthenon that were saved from destruction by Lord Elgin and are still displayed today at the British Museum.

Detail from the Parthenon marbles depicting riders on horseback

However, the London Mint Office’s new Research and Development Manager Justin Robinson has proposed the theory that another classical work from the ancient world may have inspired the composition of Pistrucci’s iconic design for the Sovereign.

Between 350 and 353AD much of Western Europe was controlled by the Emperor Magnentius, a former military leader who had seized power from his predecessor Constans in in a coup. Largely forgotten today, Magnentius ruled over Britain, France, Germany and Spain for three years and, in the spirit of most self-made Roman Emperors he began to strike coins bearing his own image.

It was while Justin was examining ancient coins with numismatist Dominic Chorney that they realised that one of Magnentius’ reverse designs bore a startling resemblance to Pistrucci’s famous masterpiece created 1,500 years later.

Gloria Romanarum, struck during the three year reign of the Emperor Magnentius (350-353AD)

“Gloria Romanorum” (the Glory of Rome) depicts a helmeted rider on horseback fighting a barbarian.   Even to a casual observer the similarities in the composition to Pistrucci’s design for the Sovereign are remarkable;

Whilst there is no definitive evidence that Pistrucci saw Magnentius’ Gloria Romanorum, the ancient coin was minted in large quantities and many fine examples have survived to the present day. This means that it is possible that the coin featured in at least one of the private collections of classical antiquities that Pistrucci was shown by his wealthy customers.

Pistrucci’s autobiography records a meeting he had shortly after arriving in London with a Mr. Knight, “a great connoisseur in gems, cameos, and intaglios, bronzes, statues, medals, and antique vases” who had a “cabinet full of precious things”. This particular meeting ended badly, as Pistrucci identified one of Knight’s prized antiques, “the finest Greek cameo in existence” as being his own work created just six years previously! A furious Knight refused to accept this even though Pistrucci happily prepared new, superior versions to demonstrate his mastery of the craft.

We may never know for sure exactly which elements inspired Pistrucci to create arguably the most famous coin design in history. However, the striking similarities in composition between Magnentius’ Gloria Romanorum and Pistrucci’s St George and the Dragon make it an intriguing possibility that the brilliant nineteenth century Italian artist was inspired on some level by the largely forgotten fourth century Roman emperor to create the enduring masterpiece that still appears on UK Sovereigns struck to this day.