LONDON MINT OFFICE AT THE WORLD MONEY FAIR 2017 IN BERLIN 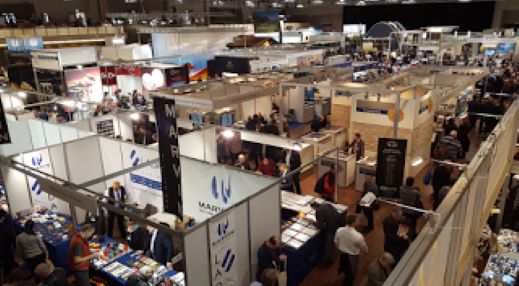 Now the biggest coin event across the globe, World Money Fair is the ultimate event to visit for coin enthusiasts of any level. Whether starting off with your first coin or you 500th coin, it is a great chance to meet people from all walks of life interested in the fascinating world of coins.

But where did the World’s biggest coin fair start its journey?

It All Started With the Silver Crisis in The 1960s…

With the historic boom in the price of precious metals in the mid-sixties, coin collecting attracted greater interest worldwide. True to the motto of the English economist Sir Thomas Gresham (1519-1579), “Bad money drives out good money”, coin clubs were founded worldwide and invited their members to collectors’ meetings and recommended hoarding coins whose metal value was above the market value, as a stable form of investment.

January 22nd 1972 in Basel Northwest Switzerland saw the first international coin event took place using the guidelines of the OEMB, later establishing itself as the Basel Coin Fair attracting a variety of visitors interested in classic coin exchange. This ran successfully for 10 years. To mark its 10th anniversary the Royal Canadian Mint was the first mint to take part in an international coin exchange in 1981 as a gap in the market was seen with there being no direct contact between international mints and European collectors. There is now a place for industry professionals to be able to communicate with coin collectors of all levels, and a place for people to come and learn about products and collecting. (Click here for more on the history of the fair)

The Unveiling of the London Mint Office Sovereign: An Iconic Design Remastered

As leading industry professionals the London Mint Office attend World Money Fair each year to inspire, promote and interact with the coin world. 2017 however is a very special year for the London Mint Office as it was revealing its brand new 2017 Sovereign design of George & the Dragon by Angela Pistrucci, great great great grandniece to the late Benedetto Pistrucci who designed the original Sovereign.

As part of the Samlerhuset reception at World Money Fair we at the London Mint Office were very proud to reveal our new 2017  St George & the Dragon design, an iconic design remastered by artist Angela Pistrucci (Click Here to see the full story on the design).

The reception was kick started by a talk from one of the Samlerhuset founders Ole Bjørn Fausa who warmly welcomed everyone and went on to talk about the exciting development of our modern Sovereign Design.

Ole interviewed a variety of guests on the amazing new design including:
Raphael Maklouf- Legendary Master Sculptor best known for designing the effigy of Queen Elizabeth II used on the coins of many Commonwealth nations, spoke with Ole on the development of the Sovereign over the years:

The honorable Joseph Bossano MP then took to the stage with pure excitement over the design and love for the heritage of Gibraltar and its commemoration of coins:

During the Media Forum the Minister went on to say:

With so many kind words Angela Pistrucci  took to the stage, welled up with joy and a sense of pride, she talked about her journey of her heritage and design.

“A truly wonderful evening for not only the London Mint Office but also an exciting event for the Coin industry with the first St George and the Dragon design from the Pistrucci family in 200 years”- Tony Chilcott Senior Project Manager London Mint Office.

A Proud Moment for All Involved.

Later during the fair Angela was kind enough to talk more about her journey and even gave a heartwarming speech about her emotional time during the project as well as the future of the Pistrucci family within the coin world (Originally recorded LIVE to Facebook):

Other High lights from the World Money Fair:

On July 3, 1967 the South African Mint in Pretoria issued the first Krugerrand coins. These coins could be used as circulation money; however, they did not bear a nominal value. Instead, the exchange rate at which South African banks traded Krugerrand coins was fixed daily, according to the price of gold. So, from the start the Krugerrand was conceived as a bullion coin of changing value (Click here to read more).

“The media forum on Friday morning took place in the Estrel’s large conference auditorium, and was well attended.  It presents the Mints attending the Fair with an opportunity to showcase their forthcoming coins and new technologies. This year, the Fair was honoured to have the Finance Minister for Gibraltar who spoke at length about the new Gibraltar Sovereign, I thoroughly enjoyed this and took a lot from it” – Justin Robinson, Research & Development Manager

The World Money Fair each year jumps from strength to strength and we at the London Mint Office are overjoyed to attend each year to network with other coin lovers from around the world.

Enjoyed this Blog? Click Here to find out more about our 2017 Sovereign Coin