The quality of a coin can be determined by its metal content, by its finish or by both.

Different processes are employed in the striking of coins to ensure that they have greater durability and collectability. Coins minted for circulation are usually minted in a lower quality than those struck for the purpose of collecting or investment. The following is an explanation of the various minting terms that are widely used by mints and collectors to denote the different qualities. 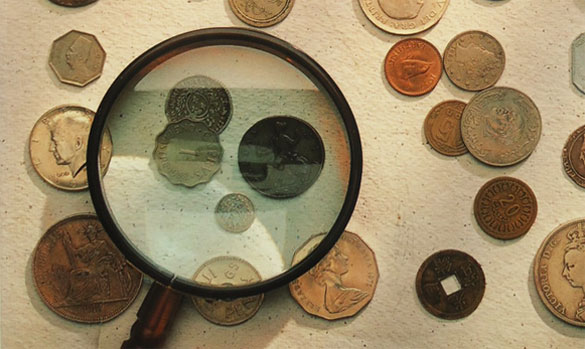 Coins are produced when two dies strike a blank piece of metal with tremendous force.

Best minting quality possible: ‘Proof quality’ is the best minting quality available and is reserved primarily for commemorative coins. It is characterized by the raised part of the motif, which stands out from the shiny, mirror-like surface of the coin and may have a matt finish to contrast with the shiny background.

Special treatment of the tools to ensure best quality:  Essentially, a proof coin is made with a specially polished and treated die. Modern technology allows the high points of the coin design to be acid treated, while the background (field) design of the coin die is polished to create a mirror-like look. The result is a frosted look (frosting) on the raised parts of the design, with a mirror like finish on the background. This contrasting finish is often called cameo. Sometimes you will find the letters ‘CAM’ added to a coin’s description – this means cameo appearance – DCAM means deep cameo and indicates that the cameo appearance is strong and easy to observe.

High standard of minting process for a better coin quality: Proof quality is a result of a highly complex minting process. Most mints today have adopted the British standard, where the coins have a mirror surface and frosted reliefs. The blanks are typically polished with brushes before minting to remove residue from soap and polish paste that can interfere with the end result. The dies used in this process have sharper detail and are not used as long as the dies for mintage of circulation coins. In addition, the coins are minted using more tonnage of pressure, so that the metal will flow more and require a one-by-one minting technique.

Multiple strikes for one coin, to make the motif perfect: After each strike the dies are inspected and often re-polished by hand. Platinum can require as many as 10 to 12 punches before a coin is finished. This explains why the minting of proof coins is an almost manual process – the coin is not only examined when it is finished, but also during the striking of each individual coin, in order to ensure perfect quality.

Each additional strike increases the discard rate for the mint, and therefore increases the cost of the finished coin. Proof coins can be expected to be absolutely perfect, without blemishes, when looked at with the naked eye. By contrast, such mints as the Norwegian mint define proof quality not according to the amount of mirror surface and frosted relief, but according to the sharpness in the detail of the finished coin. This moves the quality towards describing a process instead of a finished product.

Absolute attention to detail: To make the relief and the legend stand out against the mirror-like background of the coin, these parts of the motif are sandblasted or treated with a very fine tool. The environment in which this takes place must be completely dust-free, and often the production staff involved are required to wear surgical masks and cotton gloves.

Highly manual minting process: Each coin is put into the minting machine by hand and struck up to five times, on each occasion with a pressure of up to hundreds of tonnes. By striking more than once, the metal is forced into all the crevices of the die, so giving a very fine detail to the image on the coin that does not appear on some non-proof coins. After only a few coins, the minting tools have to be polished again with a leather cloth. After only a few hundred such coins are worked on, the minting dies must be removed from the machine and either refreshed or replaced. For this reason, the minting output of proof coins is much lower than that of ‘brilliant uncirculated’ coins – this is why proof coins are minted in only low quantities and are more expensive, and also why they are especially sought-after by collectors.

Grading of proofs: Proof coins can be graded in a similar way to uncirculated coins in order to detail their condition. ‘PR’ or ‘PF’ stands for ‘proof’ and is used instead of ‘MS’ (mint state) to indicate a proof coin. Proofs that are also uncirculated will be graded PR 60 to PR70. Because a proof coin can be mishandled or receive wear by cleaning or handling, proof grades can extend below PR 60. For example, a PR50 grade proof coin will show touches of wear on the high points of the coin. Like uncirculated coins, proofs can experience toning, tarnish or darkening.  Proof coins sent to you by the London Mint Office will normally be in the best condition unless stated otherwise. This is why all coins are delivered in a protective capsule and we highly recommend not to pen the capsule and to touch the coins, as this would, in case you ever want to resell, lower the grade of your proof coin and affect the value of your coin.

‘Proof-like’ coins may be struck in similar way to a proof coin but technically do not fit the definition of a proof.

They may not be struck multiple times, for example. Often proof-like coins are struck with polished dies but the blanks are not polished. Proof-like coins have mirrored fields - meaning that you should be able to see your reflection in the parts of the coin - and so are generally of higher quality than coins minted for circulation.

Some state mints do not strike in proof quality at all, but will issue proof-like as their best possible quality.

Brilliant uncirculated coins have been minted in big quantities together with the coins meant for circulation, but then taken out of the machine and washed and specially treated before being placed in sets.

They are handpicked and taken out of the minting process before they fall into the bags for transport to banks and do not usually have the unavoidable marks from that process found on regular uncirculated coins.

Uncirculated coins are those which have not been released for circulation. They are usually struck by a high-speed press - commonly one which strikes 700 or more coins per minute. These coins may have surface marks, scratches or light abrasions from the minting process, but they have still to be packaged in rolls or bags and placed into circulation through commercial banks.

They are in new condition as issued by the mint, but not necessarily perfect. Details are sharp and the lustre approaches the state of the coin at the mint prior to general circulation. When coins are carried in wallets and pockets and go from hand to hand they will be scratched and marked and the motif becomes less clear the more they are handled – this has not happened to uncirculated coins and they are therefore preferred by collectors, who specialize on circulation coins.

The grading system to determine the quality of old coins

In order to make sure that buyers know what condition a coin is in they are usually graded, which requires a lot of experience. There are different grades describing the state of a coin, which depend on its lustre, marks and the quality of the motif.  Some coins, especially very old ones, are only available in lower grades of quality, but depending on the availability even coins with a hardly recognizable motif can be worth a fortune.

Grading a coin accurately takes a lot of practice and a sharp eye. Many people develop the talent through experience, though there are a number of beginner’s guides available to help the novice.

Usually, the physical characteristics of a coin are the sole basis of grading a coin. Qualities like surface condition, lustre and the general appearance of the coin are important here. On the 0 to 70 pointing system, 60 to 70 are the best grades that can be given to a coin. This is called ‘uncirculated’ grade or mint condition. Having the perfect score of 70 means the coin doesn’t have any scratches, traces of handling or evidence of contact with any other coins. Having the original condition of the coin as it was manufactured also increases the value of the coin and can support its authenticity.

Since there are two sides in a coin, the coin can also have two grades. If the difference from one side to another is significant, a coin should be given a split grade. The symbol “/” is used to indicate the split grade.

Any traceable damage on a coin lessens it value. Any wear, holes, dents, and other traces that can be seen only make the grade lower. Sometimes, even the effort of cleaning or polishing the coin to improves its look can result in a lower value, so proper handling is always a good idea to keep the coin grade high - for example, by placing the coin in a box to keep it away from moisture. Patina, which will automatically build when a silver coin is getting older, is showing the age of a coin and does not necessarily lower it's value - it can be therefore the wrong decision to remove it. The London Mint Office offers cotton gloves, which protect the coin when you want to hold it, from sweat and fingerprints getting onto their surface. Buyers collecting with the London Mint Office collectors' service will usually receive this important accessory free of charge, as well as coin boxes for safe storage.