The Anatomy of Coins

Every coin has a functional value, yet it is also a statement. As well as being the product of the culture and tradition of a particular country, a coin also says much about the country itself, its perception of itself and its place in the world. American coins, for example, traditionally have a marked sense of theatre and drama that dates back to its earliest years of independence from Britain.

Coins feature important details which reveal the background to the issue and the origin of the coin. These are the characteristics that, in effect, tell the story of the coin - what it represents, on whose authority it has been issued, its date of issue, and its monetary value. The following anatomical chart pinpoints each of these features as exemplified by the United States ‘Silver Eagle’ coin first released in 1986. 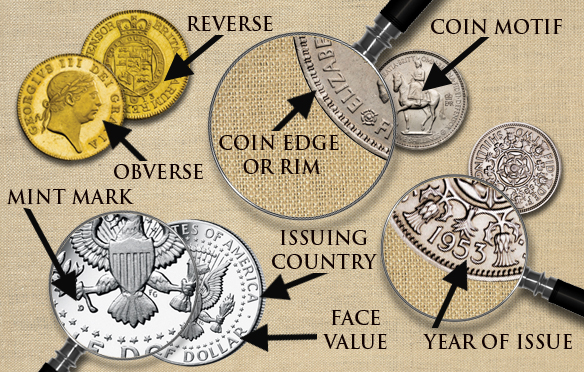 Characteristics of a coin

The obverse of the coin

This is the front side of the coin, which by tradition is the side that depicts the national emblem of a country or its ruler in effigy form. In republics this usually takes the form of a coat of arms, while monarchies use the form of a portrait of the reigning king or queen. The obverse of a coin is commonly called ‘heads’, because it often depicts the head of a prominent person, whereas the reverse is called ‘tails’.

The reverse of the coin

The reverse of the coins usually depicts the chosen motif. If not provided for on the obverse, the reverse side usually contains information relating to  the value of the coin. Additional space typically reflects the issuing country's culture or government, or evokes some aspect of the state's territory.

Commemorative coins are usually issued to mark specific events and therefore have changing motifs on the obverse or front side of a coin, plus a relevant inscription. The specifications and motifs of each coin is determined by the government of the issuing countries and motifs are often planned over long periods of times. Coin motifs are created by artists and the transition from a preliminary design on paper to a 3-dimensional piece of metal is a complex process.

The motifs of circulation coins are normally fixed and stay the same over many years. Some motifs, such as the iconic 'Britannia' or the popular 'St George and the Dragon' are true pieces of art, interpreted by different coin designers and are repeated on many different coin types. The disappearance of Britannia from British coinage over 40 years ago has caused massive demand for 'Britannia' coins, which has not ceased to grow since.

The coin edge or rim

The edge of a coin will either feature an inscription - sometimes text that is related to the motif, subject or issuing territory - or some kind of pattern or ornamentation. Sometimes the edge remains blank.

On most modern coins, the name of the issuing country is shown. British coins are an exception, however.

The year of issue

Circulation coins are issued with the same design over many years.

The face value of the coin

The face value shown defines the nominal value of the coin, which is guaranteed by the issuing country. As long as the coin is valid in circulation, the state guarantees to take the coin back through the national banks and pay the equivalent amount. Most commemoration coins though never will reach collectors at their face value - they will usually be released at a price related to the metal value, the mintage and other factors which determine their collectors' value.

In some countries the minting of coins is shared over different authorized mints. Historically, for example, the minting of British sovereigns was spread across mints in Australia and South Africa, reflecting the availability of gold in these territories when the British Empire was at its peak. Some countries do not have their own mint and commission mints in other countries to strike their coins. The mintmark reveals where a specific coin has been minted.

The collectors' value refers to the amount of money that collectors are prepared to pay in order to acquire a specific coin. The collector’s value of commemorative coins will usually be higher than the face value, as the face value of commemorative coins, especially of those minted in precious metals, is often more a symbolic number, determined in the countrie's law which is basis for each coin issue.

But even circulation coins can be worth much more than their face value - this usually happens when the demand from collectors is much higher than the quantity minted and buyers have to turn to other sources than mints and official distributors to acquire them. Usually high demand is caused by low mintages or sometimes by unusual circumstances related to the mintage of the coins - for example errors in the minting process. Also the collectors' value of first and last circulation coins minted of specific types, currencies or motifs can be much higher than their face value.